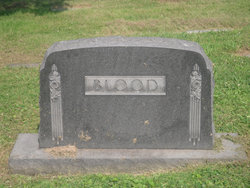 Woodmere Cemetery was established in 1918, and is located on Washington Blvd.  Woodmere has several legends attached to it, and the entire cemetery is said to be haunted.  Witnesses have reported seeing shadowy apparitions at night, and have captured photographic anomalies.

The most well-known legend of Woodmere Cemetery is that of Mother Blood.  There is a  tombstone near the road of the cemetery inscribed with the words Mother Blood.  It is said that at midnight on a full moon (or Halloween, depending on who is telling the story) the light hits the stone in just the right way to make it look as if the stone is actually bleeding.  The legend further goes on to say that Mother Blood was a mid-wife who murdered babies...in reality, Mother Blood was Edith Blood, who died in 1939 at the age of 60.  (More information on Mother Blood can be found in Theresa's new book, Haunted Huntington, Volume I.)  There are reddish stains dripping down the back of the stone, which can be attributed to the natural weathering process and leaching of the stone, and possibly...even stains from where a "clip on" flower vase was positioned atop the grave.  In fact, several nearby graves also have similar stains.  Photos of the Blood monument are property of Theresa Racer, and can be found on the Find a Grave website.  They may not be used without permission.
.
There are a few famous burials in Woodmere, including actress Virginia Egnor, WV governor Henry Hatfield, and baseball player "Salt Rock" Midkiff.  However, Woodmere is the final resting place to another sort of infamous family...the Patterson family.

"Tuesday morning, October 25, 1932, a few weeks before the presidential election that would send FDR to the White House in the depths of the Depression, Huntington residents awoke to read front page headlines about the murders of coal executive S.W. Patterson and his wife at the hands of their 27-year-old son, Thomas C. Patterson, who then took his own life. The annihilation of this prominent Huntington family occurred at about 11 p.m. Sunday, "in the palatial Patterson residence on Staunton Road," in the Highlawn section of town. Evidence at the scene of the double murder/suicide showed that Mrs. Patterson had been shot twice in the head as she listened to a radio program in the living room. Mr. Patterson was killed as he sat reading in his study at the other end of the hall. He was shot once in the head and there was a gash in his forehead, presumably from the blow of a hatchet that was later found in his son's room.

After the murders of his parents, the son, Thomas, locked himself in his bedroom where he slashed his wrists with a large butcher knife and bled to death. An article reports that a note found in his bathroom read: "`I have been murdered by a ghost - a devil. I wish to be cremated. Homicidal maniac. I'm sorry.' The note was signed by the young man's initials - T.C.P.," says the story.

The bathroom was described as "a shambles" with blood-smeared walls where the younger Patterson had tried to write on the wall with his own blood and with hatchet marks where he had hacked the wall. The bathtub and basin also were smeared with blood.

Inside the son's room and bathroom were found a Colt revolver, two hatchets and a large butcher knife.
An article states that Thomas Patterson was "a writer and poet" who had graduated from Yale University in 1926 and had returned to Huntington to live. After his graduation, Patterson had pursued a literary career. It adds that Patterson had had a slim volume of poetry privately published and he had completed a biography of Edgar Allan Poe that was in the hands of a publisher.

The official investigation of the double murder/suicide case revealed that the younger Patterson had suffered from a mental condition for several years and had been under the care of a Baltimore psychiatrist who had recommended that he be institutionalized.

The Pattersons had moved to Huntington from Williamson, W.Va. in 1923. S.W. Patterson was in business with his brother, Col. G.S. Patterson, of Huntington, in the Sycamore Coal Company.

An article reports that the inability of servants to enter the Patterson home on Monday morning led to the gruesome discovery of the bodies by Col. Patterson and his wife.

The Patterson home is also said to plagued by paranormal activity.  However, the current owners are not willing to discuss such matters, so please respect their privacy.