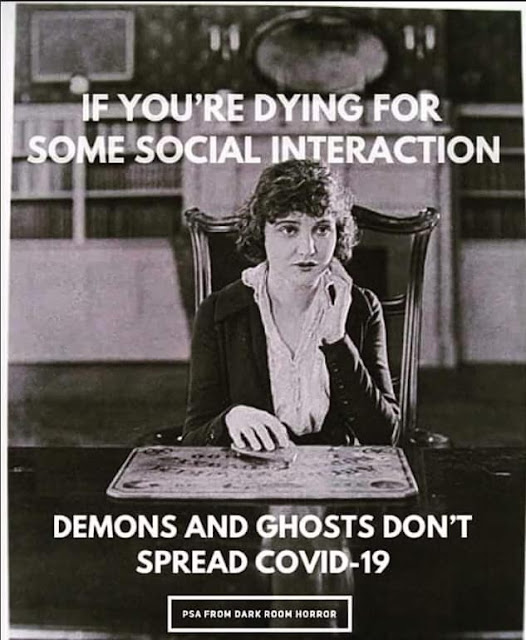 Seriously, though...I hope everyone out there is staying safe and healthy during these trying times.  If you haven't already, please follow Theresa's Haunted History on Twitter or Facebook.  I'll be sharing tons of fun, spooky distractions to keep you informed and entertained throughout this period of social distancing.  I've got tons of stories, documentaries, books, podcasts, and articles to share with you, plus some upcoming ideas on how you can continue your own paranormal investigations and research from home until it becomes safer to get out in the field!

Let's all do our part to help each other through the next couple of weeks and months. Stay positive, stay healthy, and stay spooky everyone!

Do Ghosts Watch Me Shower? 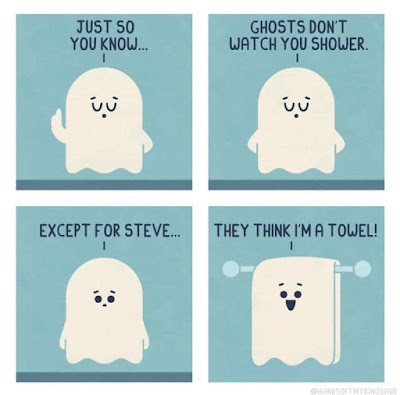 Happy Friday, everyone!  I hope you've had a great week and are looking forward to an even greater weekend!  Today's post is one of those Friday Funnies with just a tad of more serious information thrown in, lol.  Recently, my son was asking me some questions about ghosts and one thing he was particularly concerned with was whether or not ghosts were waiting around the bathroom, ready to watch him take his bath.

I told him what I tell others with similar concerns.  The short answer: yes, it's possible...but not very likely.

To stretch this opinion out a bit further, we have to make a few assumptions.  To start, it would seem that the majority of hauntings are not intelligent, but residual in nature. Simply put, that means that there is not a sentient entity at the location. Rather, any paranormal activity that may be witnessed is more like an imprint on the environment, being played back much like a movie on analog tape. There is nothing there to interact with you, let alone stalk your bathroom activities. You can watch a movie being replayed; the movie cannot watch you.

But, let's say that you have been experiencing some intelligent, interactive activity.  There are a lot of theories out there as to whether or not an intelligent haunting is caused by the location being haunted, a person being haunted, or both.  If you have a ghost/spirit/entity that follows you around wherever you go, you MIGHT have them sneaking a peek every once in awhile during your shower.  But, if you believe that intelligent entities are nothing more than people who have died, you have to ask yourself:  would they actually want to see you naked? What's in it for them? If you have any concerns, you may just want to ask them aloud to respect your privacy.  Most people, dead or alive, are apt to comply.

Similarly, if your location itself is haunted and you're concerned that your ghost is hanging out in your tub, ask them politely but firmly to leave you alone.  However, if an entity is tied to a specific location, even as an intelligent entity, it is probably more concerned with its own issues than with your hygiene habits. One of the most popular theories about why ghosts are still here is that they have unfinished business---and YOUR business isn't high on their radar.

So, again, its possible but not likely that you'd have a creepy Peeping Tom ghost watching you take a shower.  Having said that, however...it does seem like quite a few bathrooms have paranormal activity!  You can read more about Haunted Bathrooms on Theresa's Haunted History!
Posted by TheresaHPIR at 6:55:00 PM No comments: Links to this post