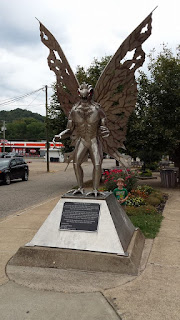 Another Mothman Festival is in the bag!  This year, instead of manning a vendor's table, Aaron, Luke, and I participated simply as spectators...and we had a blast.

Although the festival is a 3-day event, we decided to go down on Saturday.  That Saturday was also special for another reason:  not only was it a day to celebrate Mothman's unique history and contribution to the paranormal world, but it was Luke's 10th birthday!  Therefore, we sort of let HIM (Luke, not Mothman) call the shots.  We arrived in town around 11 am, and as soon as we crossed the bridge into Point Pleasant, we KNEW this festival was a big one---traffic to Krodel Park, where parking and shuttle service were available, was crazy.  But, it didn't take too long, and we made it to Krodel, found a parking spot, and after only a short wait, were on the shuttle to downtown 'Mothman City.'

Luckily, my family and I live about 40 minutes away from Point Pleasant (dubbed 'Mothman City' by Luke when he was little) and we enjoy visiting the area throughout the year.  So, we've seen the totally awesome Mothman Museum and have had our picture taken with the Mothman statue on non-festival days.  Therefore, we were able to skip the lines for those iconic activities and explore what else the festival had to offer.  Luke was hungry, so we decided to start off with some lunch.

Again, because we live so close and visit so often, we were able to skip some of the more sought after sit-down restaurants in the area and went straight for the fair fare.  I had my favorite, ribbon fries, Aaron had pizza, and Luke had a corn dog and fries, which he washed down with a purple alien full of lemonade. The guys also split an order of fried cookie dough with the clever moniker of 'Moth Balls.'

We took our food over to the riverfront amphitheater and caught about half of the costume contest.  I really wish we had gotten there a little earlier, because what we caught of the contest was absolutely awe-inspiring.  There were so many great costumes, many of which featured an interpretation of Mothman himself, and so many of the participants REALLY got into their characters.  All the costumes were wonderful, but I had a soft spot for the Yip Yaps of Sesame Street! 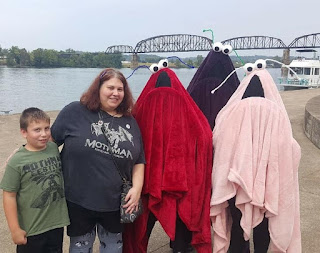 Since we were mainly doing stuff Luke wanted to do, I only got to catch one guest speaker at the haunted State Theater this year.  Brian Seech, a cryptozoologist, UFOlogist, and paranormal researcher with the Center for Unexplained Events, gave an interesting presentation on 'Winged Entities from Antiquity to Present Day.' While I was learning about different winged humanoids from different cultures and different time periods, Luke was mauling himself, as he does every year, on the Wipe Out-style inflatable. 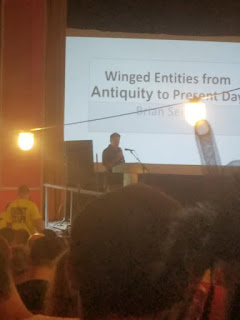 Luke also won a stuffed animal playing a balloon darts game, threw food into Slimer's mouth over at the Ghost Busters tent, met some Star Wars characters, and picked up a few souvenirs.  I ran into Les from WV Cryptids and Strange Encounters and tried to say hi to the guys at Wild and Weird West Virginia, but they were so busy!  I was thrilled to see that Andrew Smith was in attendance, representing the Flatwoods Monster Museum and giving a talk about West Virginia's other favorite monster at the State Theater. As always, the festival was overrun with awesome vendors selling the absolute coolest UFO, cryptid, paranormal, and horror merch around, and there were so many cool authors, researchers, and organizations representing this community.  And what a great community it is!  Sometime I always note about the festival each year is just how freaking nice everyone is.  I have been to the annual Mothman Festival well over a dozen times and its eerie just how sweet, compassionate, and understanding everyone I've ever encountered there has been.  People from all walks of life and from all geographical locations (we were on a shuttle with families from New York, Pittsburgh, Virginia and Kentucky) come together for this shared glimpse into one little town's brush with the unexplained.  It really is heartwarming, but I don't wanna get too sappy, because I haven't yet mentioned our favorite part of the festival this year...

WE MET JACOB THE CARPETBAGGER!

So, several years ago I stumbled across a YouTube channel for a guy called The Carpetbagger who traveled the United States, visiting weird festivals, strange roadside attractions, haunted places, museums, and just all kinds of cool places.  As time progressed, Luke and Aaron also started watching with me, and it became the norm during family dinner time to flip on the television and see where The Carpetbagger had been to recently. 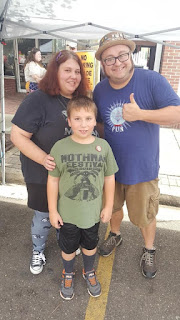 Last year, The Carpetbagger was at the festival as a spectator, and Aaron got to meet him five freaking minutes after I had walked away from our table to see a speaker down at the State Theater.  I was super jealous, so when I heard that The Carpetbagger would be an actual guest this year, I knew that no matter what, I was meeting him.  Luke was super excited as well, talking about how he was going to get to meet a famous celebrity.

I was not disappointed.  We met Jacob and his wife, and they were both just as nice and down to earth as they appear in their videos.  Luke was shy, but Jacob shook his hand and wished him a happy birthday.  We bought t-shirts, a Carpetbagger pressed penny, and a button.  Of course, Luke and I had to have our picture taken with him, since Aaron had received that honor the previous year.  Since then, we've had a blast watching the videos The Carpetbagger has uploaded from his Mothman Festival trip.  He got to stay in the super haunted, super creepy Lowe Hotel and proudly completed Hillbilly Hotdog's Homewrecker Challenge.

As always, I walked away from the Mothman Festival feeling so happy to have had the opportunity to be a part of this annual gathering.  So much work goes into providing this FREE festival, and Jeff Wamsley and his crew do such a great job keeping this festival growing and evolving from year to year.  If you can make it to the Mothman Festival (it takes place the third weekend of September), I highly encourage you to do so.  It's a great resource to see top-notch researchers and authors share their knowledge on stage in a haunted theater, to meet members of the paranormal community in person, and to have access to a huge variety of artwork, books, movies, and other souvenirs, all in one spot. If you can't make it to a festival, I still encourage you to visit Pt. Pleasant any time of year!  The museum is open year round and the famous Mothman statue is available any time for photos.  The Lowe Hotel is an affordable place to spend a night and possibly see a ghost, and if asked, most locals in town will give you directions on how to get to the TNT area to see the open bunkers!

There's no way I could cover ALL the activities, speakers, vendors and guests that make The Mothman Festival one of the most unique in the country, so if you're interested in learning more about it, beyond my very narrow view point, please visit the Mothman Festival's Facebook page and website.  Stay spooky, my friends!

In honor of yesterday being the anniversary of the Flatwoods Monster sighting, I bring you this alternate scenario.  Instead of meeting a group of local children and mother to two of the group, what would have happened if a moonshiner was the first person to make contact with The Flatwoods Monster??

This Crypto-Toons is by Robert A. Howell.
Posted by TheresaHPIR at 12:00:00 AM No comments: Links to this post 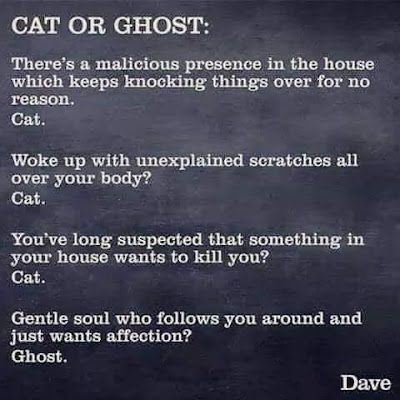 As someone who has lived with both cats AND ghosts...I can attest to the validity of today's Friday Funny!  And as a person with a skeptical nature, I can also attest to the idea that cats make a great scapegoat for paranormal activity.  Any time I hear an unexplained noise, or have small items go missing/move on their own, its pretty likely there's a cat to blame.  My black cat, Ichabod, has a habit of slinking around in the dark, making most peripheral vision shadows and movement also the result of a cat.


If the idea of living with a ghost scares you, I'd highly suggest adopting a cat!
Posted by TheresaHPIR at 1:10:00 AM No comments: Links to this post