Summer is almost officially here!  Well, it has FELT like summer for several weeks now, with temperatures reaching through the 80s here in the tri-state, but soon school will be out for the year, baseball will be over for another season, and I can finally concentrate on some spooky summer projects.  So, here's a quick look at what's been going on with Theresa's Haunted History, and what's coming up over the next couple of months:

1. I ALMOST completed my Blog-a-Day Challenge for April! I think I ended up missing 3-4 days at the end because of some complications with my TMJ. Those issues bled over into  May, but I'm still pretty proud of the amount of content I was able to push out before then.  In fact, my post about the hauntings of Branson's Titanic Museum went viral and quickly became the most viewed blog post of all time on here.  That was pretty unexpected, to say the least!

2. I somehow ended up on the Top 50 Paranormal Blogs and Websites to Follow in 2018!  I ranked #19 on the list, which includes some really awesome pages, many of which I've already been reading for years.  Go check out some of the other sites on the list for plenty of fascinating paranormal reading on a variety of spooky and strange topics.

3. There WILL be a book by Autumn! I don't want to say too much just yet, but it will focus on a rather narrow niche in West Virginia's paranormal lore, and will hopefully be a really fun combination of fact and folklore.  Throughout the summer, please keep an eye out on Theresa's Haunted History Facebook page---I'll be asking for personal experiences and input on several stories to be featured, and I'd love to include YOUR insight in my book!  Wrapping up the final details will be my main summer project, but there are a few on-going research endeavors happening as well.  I'm trying to organize tons of newspaper articles, death certificates, and other documents concerning both the Trans-Allegheny Lunatic Asylum and the West Virginia State Penitentiary into something actually useful.  I've also got a ton of new information to add to older blog posts, but I just haven't had the time to update as much as I should.

4. This year's family vacation will be to the Wilmington, N.C. area where I'll get to tour the haunted USS North Carolina.  There are also a few ghost tours offered in the area, so we're researching what will be available while we're in town.  For Mother's Day, my boyfriend gifted me with FOUR new books on ghost stories and legends from the area to get me fired up for this trip.  I'm not a huge fan of the beach, so while the boys get their beach vacation during the day, the nights will belong to me and my spooky pursuits.

5. I've been invited to participate in a local investigation towards the end of summer at a pretty fascinating location.  Since its not my personal case, I don't know how much, if anything, I will be able to share, but another good chunk of my research time will be devoted to uncovering as much about the history of this location as I can.  I've already accumulated a pretty good stack of newspaper articles to add to the pile of other projects' documents----can you tell I'm a bit ADHD and like to jump around a lot?

Anyway, that's the important stuff...I think. Like always, my family and I plan on plenty of short, little day trips, some of which will undoubtedly lead to battlefields, graveyards, museums, and other spots of paranormal interest, so be on the lookout for blogs about that.  I hope all of you out there have a wonderful and productive summer, filled with plenty of ghostie goodness of your own.  Happy Haunting and Stay Spooky!
Posted by TheresaHPIR at 5:26:00 AM No comments: Links to this post

Here's a humorous tale for you!  Although the story takes place in Philadelphia, PA, the article appeared in the September 6, 1907 edition of The Daily Telegram, a Clarksburg, WV based newspaper.  And, while this story IS pretty funny, I gotta say that its a bit sad that even 110+ years ago, people were stealing metal from cemeteries to make a quick buck.

When Policeman Barnes of the Twentieth and Berks streets station, Philadelphia, heard weird sounds in Glenwood cemetery very early in the morning, he crept stealthily along the fence and entered the graveyard in full expectation of a real adventure.  And he was not disappointed.  The adventure was so real that the doughty officer's hair stood on end, and he fingered his club in nervous fear of its futility in dealing with the supernatural.

First, the sounds, deep and regular, like the breath of troubled dreams, grew louder; then, as he approached a grave well in the center of the cemetery, he saw a faint, eerie light that flickered from a rough pine coffin case beside the grave.  The light trembled and flashed and faded and then brightened, though always vague and ghostly and unearthly.

To Policeman Barnes it seemed quite the most natural thing in the world that he should rap softly three times on the coffin case and that the lid of the box should suddenly fly open and reveal a human form, dimly visible by the light of a small lantern.

When the first shock of discovery was over, it took the policeman only a moment to see that this was no dead one, but a live creature, sound asleep and with a pile of metal coffin plates for a pilow in the overturned rough box.  The officer woke the intruder sharply enough and took him to Magistrate Rau.

The grave walker and would be grave robber gave his name as William Evert and his address as Glenwood cemetery.  He said he had just dropped into the coffin case for a nap.  He did not, however, explain his predilection for cemeteries nor the presence of the metal name plates, and the magistrate sent him to Holmesburg for three months.
Posted by TheresaHPIR at 12:00:00 AM No comments: Links to this post

Where Are the Spoons?!

Well, its happened. I've discovered what is going to happen to ME in the afterlife! I'm gonna go ahead and apologize in advance to the families that I frighten/perplex with my unresolved anger issues and frustrated outbursts that will surely survive the death of my physical body.

This awesome little cartoon is courtesy of Zach from ExtraFabulous Comics.  If you dig his work, go support him on Patreon! 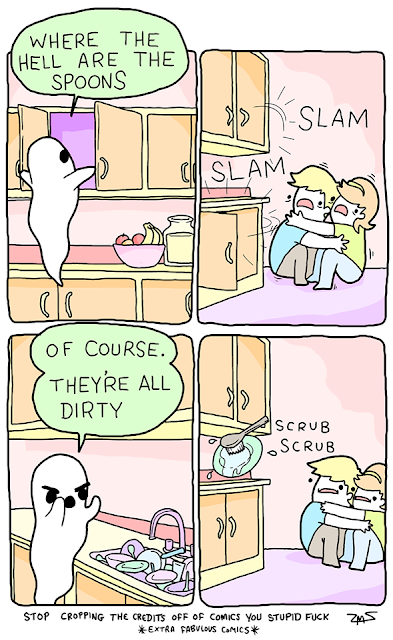