The information for today's post comes from an excellent little book called The Ghosts of Charleston by Edward B. Macy and Julian T. Buxton III. While fairly short, its packed with stories from Charleston, South Carolina's many, many haunted hot spots, including a whole chapter dedicated to today's photograph: 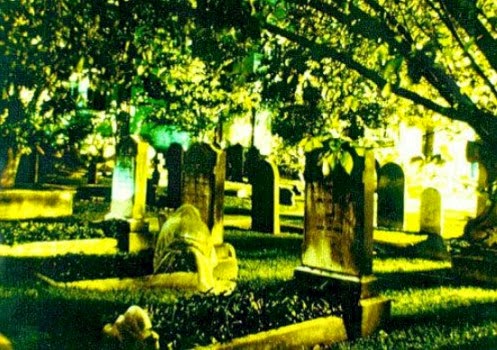 The photograph above was taken about 11 pm on June 10, 1987 at the St. Philip's Church Graveyard.  Local resident, Harry Reynolds, had been out all day testing his new Kodak ASA-200 film camera, when he decided to end the day with a couple of shots at the nearby cemetery.  Unfortunately, the gates were already locked for the evening...so Harry cut through a nearby playground that adjoined the cemetery property, and took his photos through the wrought iron gate.

Most of the cemetery shots turned out rather dark, but the image above, which was the last on the roll, came out showing what appears to be a clear image of a shrouded woman kneeling over a grave!  Thinking it was a simple double exposure, Harry sent the photo and the negatives off to the Kodak lab, where experts ruled out that possibility, as well as the possibility of tampering.

Convinced he had caught a real ghost on film, Harry then set out with the help of his wife and a friend to discover who the ghost could be.  They learned that the grave belonged to Sue (Susan) Howard Hardy, wife of Gaston Hardy, who was the Secretary of the Treasury for the South Carolina Railroad.   She had died on June 16, 1888 at only 29 years old.  As their research would show, Sue passed away from complications due to labor.  Her stillborn baby had died six days earlier...on June 10th.

Harry had taken a photograph of what appears to be a woman in mourning, 99 years to the day, after Sue Hardy's child had died.  Is this a photograph of a mother mourning the loss of her child from beyond the grave or simply a camera malfunction?  If you're in the area, you can find out for yourself! Today, the cemetery is a favorite stop on the different Charleston ghost tours and it is reported that the mournful cries of a woman can be heard at certain times in the evening.  Some of the tours also offer a warning:  When copies of the photograph by Harry Reynolds are passed out to guests, pregnant women are warned not to touch them after several incidents have arisen where pregnant women DID handle the photographs and consequently felt as if they were being choked, felt nauseous, etc. The church, however, doesn't put much stock into these reports, and has gone as far as to issue the following signage: 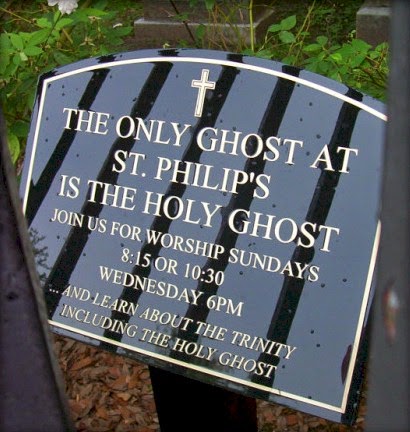 Today's Haunted America location comes from Anchorage, Alaska and is really more of a fright bite.  As interesting as the story is to me, there just really isn't any information on this location and its hauntings anywhere online.  Nevertheless...

Alaska became a part of the United States in 1959, but it wouldn't be until over five years later that its first governor, William Egan, established the state's Supreme Court (1965).  Originally composed of three justices, Buell Nesbett led the group as the Chief Justice.  As the state's needs continued to grow, the decision to increase the number of justices from 3 to 5 was made in 1968, and one of those justices was the Honorable George Frank Boney.  Boney served as a justice for two years.

In 1968, Judge Nesbett retired, and Judge Boney took his place, becoming Alaska's second (and youngest) Chief Justice of the Supreme Court.  Unfortunately, tragedy would cut Boney's career short and he died in a boating accident on August 30, 1972.  Born in July of 1930, Boney was only 42 years old.

His legacy would live on, though.  Completed in 1973, Anchorage's new judicial building was named the Boney Memorial Courthouse at the insistence of a former state attorney who claimed to feel the presence of the deceased judge.  In fact, the modern courthouse, the first to incorporate public art in its design and planning, is said to be haunted by none other than Judge George Boney himself. 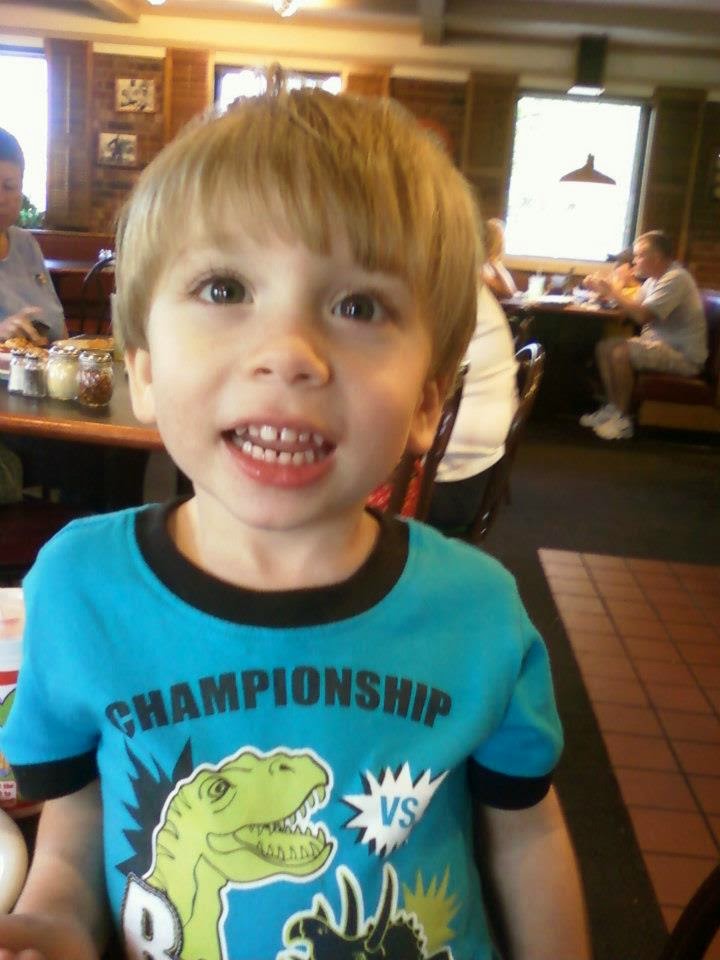 My own son, Luke, is almost 5 years old.  Since he learned to talk, he's definitely said some strange things...but things that seem to suggest that perhaps he could see ghosts.  Not once did he ever say anything that was exceptionally creepy, and he certainly didn't say anything that would make me think he was reincarnated. That changed a few days ago!

Luke and I were driving home one evening, and like most kids his age, he LOVES to talk and discuss anything and everything he can think of.  We were almost home when he started talking about being a big boy.  Being a "big boy" has been a big deal for Luke lately.  He just started wearing underwear FULL TIME (no more pull-ups!) and will be starting preschool soon. He was chatting away about things he could do now that he couldn't do when he was a little baby when he asked me very bluntly if he was old enough to drive yet.

I laughed and told him that no, he had a few years to wait before he'd be old enough to drive.  In his sweet little voice he then asked me if I would teach him to drive.  (This might have been brought on by the fact that his older cousin just got his driver's license.)  I replied that of course I'd teach him to drive, and that I would teach him many things over the next few years.  He seemed content with that answer, but a few seconds later is when the conversation turned weird.

From the backseat came a tentative, soft little, "Mom?"

Luke:  "Remember a long time ago when I was big enough to drive and I drived your car? I drived fast!"

Luke: "Yeah! You got mad, but I drived it and then car crash.  BOOM! Big crash.  Mommy, you cried and cried.  I crash and was dead."

By this time we were pulling into the driveway and good thing, because I was shaking like a leaf.  I firmly told him that he hadn't died; he was right here in the car with me and we were both fine.  He hasn't mentioned it again, and neither have I.  I know its probably nothing significant; just the ramblings of a 4 year old boy with a very active imagination who watches a lot of stuff on television that he probably shouldn't, but it really shook me up.  From now on, I'll be paying especially close attention anything out of the ordinary he says...
Posted by TheresaHPIR at 4:07:00 AM No comments:

Happy Canada Day!  Today is July 1st, and that means a great big "Happy Birthday" to our friends in the north.  On July 1, 1867 Canada became a new federation with its own constitution by signing the Constitution Act--formerly known as the British North America Act.  And, what better way to celebrate than with a Canadian ghost story?

Today's tale comes from one of the most beautiful restaurants I think I have ever seen.  I thought Columbus' Elevator was an elegant and unique dining experience, but it doesn't hold a candle to Toronto's Keg Steakhouse.

The Keg Steakhouse franchise is known for housing its restaurants in really unique locations, and the old Euclid Hall in Toronto was a wonderful choice.  Construction on the mansion began in 1867, the same year that Canada gained its independence!  It was built for Arthur McMaster, the nephew of the prominent William McMaster, founder of McMaster University.

In 1880, Hart Massey and his family moved into the home after living for several years in Cleveland, Ohio.  The Massey's only daughter, Lillian, named the home, Euclid Hall, after the street they lived on in Cleveland. Lillian was a very educated young woman, but when her husband died in 1909, it was said that her health steadily declined until her own death in 1915.  That year, the home was given over to Victoria College.  Over the years since, it served as the first home to the radio station, CFRBC, now Newstalk 10, an art gallery, and a restaurant.  It was purchased in 1976 for use as The Keg Steakhouse.

According to one website, the hauntings of the former mansion-turned restaurant began as early as the 1950s.  There are actually many, many ghost stories and sightings associated with The Keg, but none so prevalent as the ghost of the maid.

Legend has it that Lillian's death in 1915 so grieved one of her maids that the young woman tied a noose to the oval vestibule above the main staircase and hung herself.  While grief is the main reason given for the suicide, other theories claim that the maid was having an affair with a member of the Massey family, was possibly pregnant, and was afraid that Lillian's death would lead to her secret being discovered.  Whatever the cause, her body was found the other members of the staff and to this day, the spectral image of a maid is seen hanging from a noose in that area. However, somewhat contradictory to these legends, Lillian wasn't even living in Canada when she died, according to her biography.

Other sightings include a young boy seen going up the staircase to the second floor who likes to stop and peer at diners.  This young boy may or may not be the same ghost believed to be a son of Hart Massey, who, is seen angrily running around and who is to blame for an armchair found in a window frame.  Apparently, Hart scolded a young son for playing on the Sabbath, and moving a heavy armchair into the window frame was his childish way of retaliating!  Children are heard playing in the upstairs area where the children once played and slept when the mansion was a private residence, and a small child can be heard crying for his mother.

Lillian herself may also still be haunting the home. She has been seen on the second floor, but she's also credited with being the entity that haunts the ladies' restroom on the second floor.  She isn't SEEN in this location, but has scared several patrons by giving them the feeling that someone was watching them, flushing toilets, and rattling the handle on the stall doors.  In fact, one woman claimed that after feeling the eerie presence, she was shocked to actually see the latch on the stall door come undone and the door fly open!

Sources:
Ghost Walks and Dark History Tours
Why I Love Toronto
Posted by TheresaHPIR at 5:20:00 AM No comments: