The third weekend in September is always my favorite time of the year! Not only do we celebrate my son's birthday...but that's the weekend of the annual Mothman Festival in downtown Point Pleasant, WV!

This year, the festival celebrated its sixteenth anniversary, and took place September 16th-17th.  And, once again, the family and I were there for both days. However, it was in a slightly different capacity this year. I decided not to do my own table, but my mother-in-law and her sister-in-law DID decide to do a table! Aunt Betty, a renowned local potter, made several beautiful Mothman dishes, car coasters, and key chains. Gayla, my mother-in-law, an excellent artist and crafter, designed a variety of hats, bags, fans and other small items adorned with hand-drawn Mothmans (Mothmen?) on each piece. I was even able to sneak a few of my own items (used books, treat bags, pins and magnets) onto their table and sold enough to pay for parking and and a few souvenirs...but more on that later, lol. 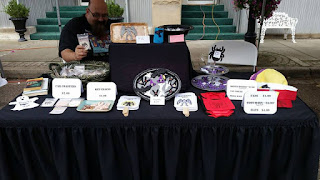 Anyway, my boyfriend and I helped man the family vendor booth Saturday. We were located in a prime spot, nearly right across from the world's only Mothman Museum. Not only did our location allow plenty of visitors to walk right past us without being too squished...it also allowed us a first look at Mothman, Batman, and Sasquatch. Yes, this unholy trio was using the cafe directly behind us as a staging area. Several times throughout the day, we'd watch them enter the cafe for a quick break, and then reemerge. The greatest part of all of this was seeing Batman carry out Mothman's wings through the narrow door, and then placing them on his back for him when they made it safely to the sidewalk. It was a very surreal experience.  Later on in the day, a fourth character emerged from the cafe and I immediately ran over and accosted him! It was none other than Mothman's Braxton County cousin, the Flatwoods Monster! I did have to laugh, however. The Braxton County/Flatwoods Monster costume contains a wide hoop skirt-like bottom. When going up and down the narrow staircase to the cafe, his handlers had to lift his skirt and turn it sideways, revealing a pair of work boots and hairy people-legs underneath. It kinda killed the magic, lol. 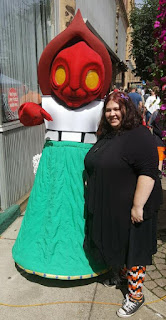 For a couple of hours on Saturday, we were also joined by my Mom and my son, Luke. I have yet to figure it out, but Luke absolutely loves the Mothman Festival and insists on coming every year. This year, his big highlight of the festival was going to his very first haunted house! This 'haunted house' was just an inflatable maze you could walk through for $5, but it was actually quite well done. There were a few spooky props set up along the path, but what surprised me was that there were a few actual scare actors hiding in there, waiting to jump out at you. At one point, we had to squeeze past a butcher knife-waving maniac to exit the maze, much to Luke's chagrin. It did scare him a bit, but he took it like a champ and I'm really proud of him. He had seen this maze on the way into the festival and had made up his mind that he was going to go through it. It was an excellent introduction to 'real' haunted house attractions, but given that he just turned 8, I think we'll wait a couple more years before moving him up to the next step!

With all of this going on, my boyfriend and I still managed to catch one of the speakers on Saturday. The lectures were once again being held in the historic (and haunted!) State Theater and once again, covered a diverse array of paranormal topics. The speakers are absolutely my favorite part of the Mothman Festival! I cannot stress how awesome this aspect of the festival really is. The festival is technically free (this year there was a fee for parking), but the quality of the lectures and lecturers is outstanding. You'd pay a lot of money to see the same or similar speakers and topics at other festivals. Anyway, the lecture we chose for Saturday was 'The History of the Infamous TNT Area' with Tad Greathouse.

Obviously, I love lectures that are of a paranormal nature, but ones that are history-based are even better! Tad had done a ton of research into the early years of the WV Ordnance Works, later known as the infamous TNT area, where Mothman was originally sighted and believed to have lived. It was an interesting talk, and inspired me to start doing some additional research of my own on the area. 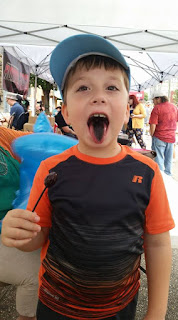 We were back Sunday, but this time, my boyfriend and I were by ourselves. We volunteered to take over the table so that his mom and aunt could rest up after sitting there all day Saturday. Since Sunday was kind of a slow day, we decided to pack up a little early and enjoy the last few hours of the festival. We caught another speaker, Bill Brock, who gave a talk on portals. We also took advantage of the smaller crowd to get some shopping done. We both bought a Mothman t-shirt at the museum. We found Luke the greatest hoodie of all time---complete with leather Mothman wings and studs. And of course, I chose a book to take home. This year I went with David Weatherly's Black Eyed Children. I'll be posting a review soon, so keep an eye out for that!

Finally, we rounded out our evening with a stop at the Mountain Monsters tent. This was the second year the AIMS team attended the Mothman Festival, but last year, they were so busy you couldn't get anywhere near them. We got some autographs and chatted for a few. All the guys seemed like really sweet, down-to-earth people, but Buck and Willie seemed especially kind and humble. They were really taking the time to meet with and talk on a personal level with all the fans. It was actually kinda touching, and I'm so glad we decided to go over there this year.

Overall, it was another fabulous event. Parking is always a pain, and this year, the shuttle service was convenient, but at $10 was still a little overpriced in my opinion. Aside from that, though, it was wonderful. There seemed to be more food vendors this year, and they were spaced out a little better, so the wait for food was significantly shorter than last year. As far as vendors in general, there was an excellent mix and everyone had such creative and clever merchandise. I could have easily spent thousands of dollars on all the handmade jewelry, print art, sculpture, etc. And, everyone we encountered was so incredibly nice. I don't know what it is about this festival, but it seems to bring out the best in people, lol. People from so many walks of life come out, many in awesome costumes, and just for a few hours, get along with everyone, lol. It really is my favorite festival and I'm already making plans for next year!

My boyfriend shot some video of the festival. Please check it out below!