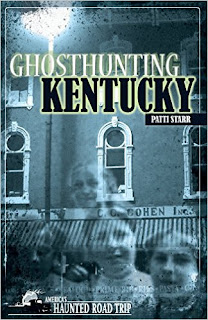 Ghost Hunting Kentucky, by the well-known author and ghost hunter, Patti Starr, is part of the 'America's Haunted Road Trip' group of books. Patti writes about 30 haunted places throughout the entire state of Kentucky that she has investigated---and that you most likely can as well!

I received this book in late September. My boyfriend travels throughout Eastern Kentucky and to Lexington quite a bit for work, and he's always on the lookout for local paranormal books for me. He happened across a signed copy of Ghost Hunting Kentucky and brought it home! Within a day or two, I had already read it, lol.

Patti Starr is somewhat of an old school ghost hunter, and while I don't necessarily agree wholeheartedly with all her paranormal ideology, I do love her and respect her work. Plus, she's visited some really interesting places throughout Kentucky and elsewhere! This was a really quick and fun read, featuring a great mix of stories from locations I'm quite familiar with and some I had never heard anything about. There's also a good mix of history, personal experiences, and investigation reports.

The book is broken down into geographical sections, with each haunted location given its own chapter. Most haunted locations featured in the book come from the central part of the state, but there's a great sampling from all over, including Frankfort's Buffalo Trace Distillery, Mammoth Cave, Ashland's Paramount Arts Center, Paducah's C.C. Cohen Restaurant, and Lexington's Kentucky Theater. Black and white photographs accompany each chapter, some taken during the investigations and believed to be of a paranormal nature.

Overall, this was a great collection of regional ghost stories, spiced up a tad by the fact that these were places that were actually investigated for paranormal activity. The best part, nearly all these locations are available for private and/or public investigation events, or at the very least are open to the public during normal business hours. I had a great time reading through the experiences of not only Patti, but the many, many employees, guests, and other visitors to these locations. It gave it quite a personal touch. I definitely recommend this book if YOU'RE looking for a quick, fun read on haunted places throughout Kentucky, but you don't have to be from Kentucky to appreciate these spooky tales.

This past weekend, my boyfriend and I made the drive to Lexington, Ky to attend the tri-state's largest paranormal and horror convention----ScareFest! The festival/convention is hosted by ghost hunter and author Patti Starr, and features tons of vendors, paranormal lectures, celebrity panels, photo ops, autograph signings, costume contests/cosplay, and much, much more! 2016 marked a landmark event with ScareFest kicking off the first National Ghost Hunting Day by coordinating what may have been the world's largest ghost hunt.

I always have a really great time at ScareFest, although admittedly, this year's lineup of guests and celebrities just didn't seem as strong as it usually is. That may have been a blessing, though....the lines for celebrity meet and greets were actually quite short and for each lecture we attended, we were able to walk right in and get a good seat.

Since the lines were so short, I went ahead and got autographs from the Ghost Hunters, Jason Hawes and Steve Gonsalves. Tango was there, and I had my picture taken with him as well with the other two, but for some reason, his autograph was an extra $10 and I just didn't bother with it, lol. The woman taking the money for the autographs already thought that I hadn't paid for my other autographs, so I didn't want to confuse her any more than she already was, lol. I had met Grant before, but this was my first time meeting the other guys. They weren't rude or anything, but they weren't especially chatty or accommodating, either. 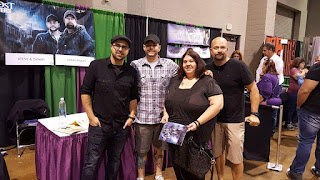 As for the lectures, we chose to go all paranormal this year. There were a few celebrity/movie panels, but nothing we were dying to see, so we went with:

1. Kyl T. Cobb: The Facts Behind the Exorcist---Kyl gave an impressive and really interesting account of the true story that inspired what many claim is the scariest movie of all time. Being a historical researcher myself, I found it very...satisfying...seeing how a little detective work resulted in finding the actual 'possessed' boy and the facts surrounding his case. The lecture included a brief discussion on demonic possession in general, with comparisons to demons in western vs. eastern cultures. The whole thing was very well done; Cobb was a great public speaker, has plenty of credentials, and shared some really interesting facts that I had never heard before.

2. Steve Kulls: Sasquatch: The Truth You've Been Told vs. Actuality---This was another great presentation on fact vs. fiction. The discussion included many aspects of Sasquatch lore, including a vocabulary lesson on where the terms 'Sasquatch' and 'Bigfoot' originated, but the main focus seemed to be on the Patterson-Gimlin footage. Digitally enhanced and stabilized footage was presented, as well as information about how the alleged confessions of a hoax didn't actually happen the way the media portrayed. Oddly enough, I had already seen most of the enhanced footage presented in a class I took last year, but it was still fun to watch.

3. Shannon Byers: How Not to be a Ghost Hunter---Known as the Paranormal Genealogist, Shannon Byers is one of my favorite researchers of the paranormal and we have eerily similar philosophies, lol. Seriously, almost every single thing she presented in this How Not to be a Ghost Hunter presentation was something that I've blogged about, have said in the past, or what I currently practice and preach, lol. So, unfortunately, I really didn't LEARN a whole lot, but it was very validating that others out there take the same approach as I do. Shannon had given a presentation on Friday, I believe, about the truth behind Pearl Bryan and the hauntings of Bobby Mackey's, and I'm REALLY disappointed that I missed that one---I've been preaching for years about all the misinformation that is spread about that place and our less-than-stellar investigation experience there back in 2007.

In addition to checking out the speakers, we spent plenty of time out in the vendors' area. I bought a stack of used books on the paranormal, a Ghostbusters t-shirt for my son, some novelty soap items, and even some items for mine and Aaron's Halloween costumes! It was fun walking around and seeing the way everyone was dressed...and there were plenty of people dressed as clowns. With the creepy clown panic going on throughout the tri-state area and down south, I thought that was pretty brave of them! We also got to enjoy a fairly good lunch in the Rupp food court. The best part was waiting in line for our Chinese food, and seeing Tom Savini waiting for HIS Chinese food, just like any other non-celebrity.

Overall, this wasn't the best year for ScareFest in terms of attendance or level of celebrity guests, but I still had a great time, and I'm glad that we concentrated on the paranormal lectures this time. As a paranormal investigator, I feel that it is REALLY important to attend educational events such as this in order to not only learn some new skills and learn what is currently happening in the field, but to also network with others. A paranormal investigator can never have too many resources to draw from, and ScareFest definitely provides an opportunity to meet and learn from some of the best in the field.
Posted by TheresaHPIR at 8:16:00 AM No comments: 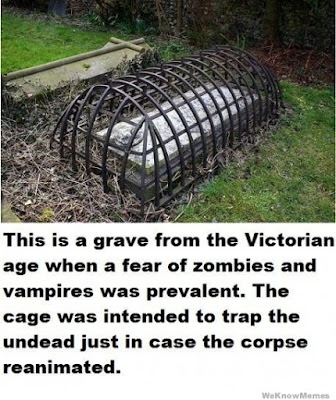 Ugh!!!!!!!  I am so sick of seeing this posted on different paranormal-themed Facebook pages/groups. I'm even more concerned when I see scores of people who actually BELIEVE that this metal cage is actually intended to trap a reanimated corpse. Our Victorian ancestors were not stupid. What they were afraid of was much more terrifying than zombies and vampires.  These metal cages were not intended to keep the ghouls from getting OUT....they were intended to keep the monsters from getting IN.

The photo above depicts a device known as a mortsafe. It was used in protection against grave robbers. Back in Victorian England, a couple of things were happening....

Before that time, medical students could only dissect and otherwise use cadavers 'donated' by criminals who had been sentenced to death. And, just about any offense could lead to hanging, lol. However, during the mid to late 1800s, social justice reform was leading to less offenses being punishable by death, and thus creating a huge shortage of corpses available to medical students. Medical science was making great strides throughout this time period, so a good supply of fresh corpses was EXTREMELY important. To help meet the demand, 'ressurectionists' would steal the bodies of the newly buried and then sell them to medical schools, generally with no questions asked.

As the practice became more and more of a threat, mortsafes and other devices were invented as a way to safeguard the bodies against theft.
Posted by TheresaHPIR at 9:18:00 AM No comments: 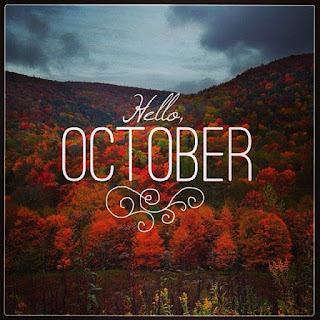 It's here! October is finally here! It's going to be a busy month, but I'm going to try my best to bring you plenty of fresh, original content as we lead into MY favorite holiday, Halloween! So, what can you expect to see over at Theresa's Haunted History of the Tri-State Facebook?

1. Name that Horror Movie Quiz: Each day in October, I'll be posting a picture from a different horror and/or Halloween movie. Test your knowledge and let me know if YOU know what movie the photo is from!

2. Daily Question: I want to hear from you! Each day throughout the month, I'll be posting a question for you to answer about various paranormal and Halloween related topics. Let your opinion be heard, and share your personal experiences. There are no wrong answers to these interactive questions, and you don't have to be an 'expert' in the paranormal field to answer them.

3. Late Night Frights: Are you a night owl? I know I am! Every night after midnight, I'll be posting about a different haunted location. Consider it a bedtime story!

4. Throwback Thursdays: Since its almost Halloween, every Thursday I'll be posting a vintage photo from my favorite holiday!


Today, I'll be at the annual ScareFest horror and paranormal convention in Lexington, Kentucky, but I'll see you tomorrow for plenty more spooky fun!
Posted by TheresaHPIR at 8:12:00 AM No comments: