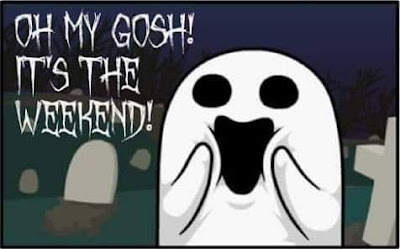 We've finally made it to the weekend!  For me, September is the official start of the Halloween season, which means my weekends for the next two months are going to be SUPER BUSY!  Do you have anything ghostly coming up this weekend, such as tours, investigations, festivals, etc.? Planning on staying in and watching ghost hunting shows or spooky movies?  Lemme know what you've got planned...and if you're looking for something fun to do and are in the Beckley, WV area, check out Haunted Beckley's Wildwood Cemetery Tour, this Saturday (August 31st)!
Posted by TheresaHPIR at 12:00:00 AM No comments: Links to this post

Vintage Mine Ghost of Pennsylvania 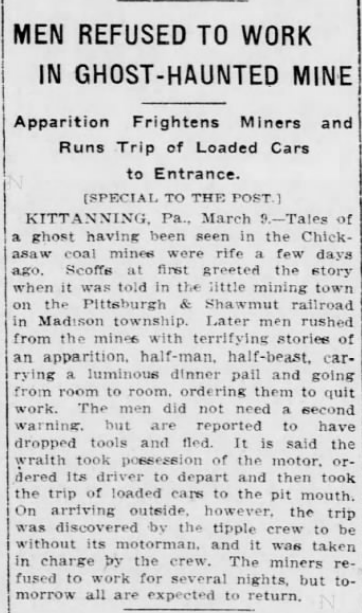 This story is from the March 10, 1913 edition of the Pittsburgh Daily Post and it reads almost like an episode of Scooby Doo!  What was this horrific half-man, half-beast that was seen in the mines and why was it so intent on getting the miners to leave?  Was it a warning of a potential mine accident...or just someone playing a prank?  I absolutely love mine folklore and ghost stories and will be delving more into that area in the next few months, so make sure you keep checking back here and on Facebook at Theresa's Haunted History.

KITTANNING, Pa., March9,--Tales of a ghost having been seen in the Chickasaw coal mines were rife a few days ago.  Scoffs at first greeted the story when it was told in the little mining town on the Pittsburgh & Shawmut railroad in Madison township.  Later men rushed from the mines with terrifying stories of an apparition, half-man, half-beast, carrying a luminous dinner pail and going from room to room, ordering them to quit work.  The men did not need a second warning, but are reported to have dropped tools and fled.  It is said the wraith took possession of the motor, ordered its driver to depart and then took the trip of loaded cars to the pit mouth.  On arriving outside, however, the trip was discovered by the tipple crew to be without its motorman, and it was taken in charge by the crew.  The miners refused to work for several nights but tomorrow all are expected to return.

*Article found on Ghost Hunt and Paranormal Research
Posted by TheresaHPIR at 4:00:00 PM No comments: Links to this post 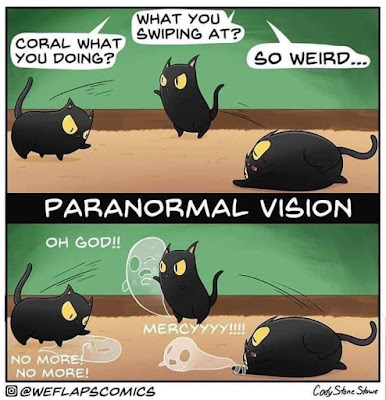 Tomorrow (August 17th) is Black Cat Appreciation Day, so I thought this would be perfect for today's post! This adorable lil' comic is by Cody Stone Stowe at WEFLAPSCOMICS and it reminds me so much of my own black kitty girl, Ichabod.  I've seen her 'fight' something that I certainly couldn't see and now it makes me wonder if she was taking down ghosts, lol.  Do you have a kitty that does weird things or seemingly sees things that aren't there? Let me know about it in the comments below, or head on over to Theresa's Haunted History Facebook page!
Posted by TheresaHPIR at 12:00:00 AM No comments: Links to this post 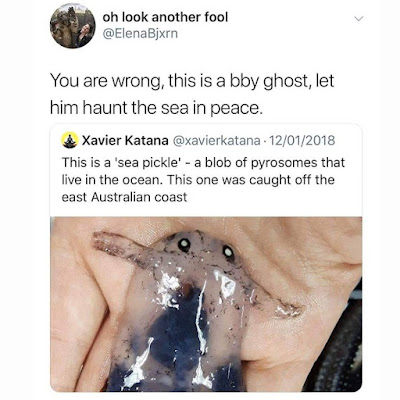 Is it just me, or does this thing look like a newly discovered Pokemon?  Anyway, if you'd like to learn more about pyrosomes, Wikipedia has you covered!  Have a spooky weekend, everyone!

Posted by TheresaHPIR at 11:10:00 AM No comments: Links to this post