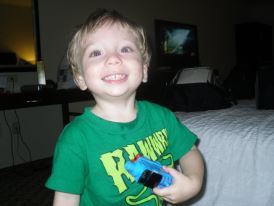 My son Luke will be turning three next month and as his verbal skills are improving daily, he's been saying some really WEIRD stuff...stuff that makes me think he might actually be experiencing some paranormal activity in our home.

These "sightings" started happening months ago when Luke told us that there was something in our laundry room.  Our laundry room, which is located right off from the kitchen, has a long history of weird things happening in it.  We've often seen movement coming from there, looking like shadowy human forms.  During a 2006 investigation of my home, we did catch some interesting video that looked like a piece of clothing pick up and fall down, followed by a ball of light which came out of the laundry room, into the kitchen, and was then accompanied by a horrific sound as if some old man was clearing his throat.

Anyway, it started with Luke going in the laundry room and saying there was an animal in there...he called it an "anmal," lol.  I thought he had seen a mouse or something so I was concerned, lol.  These sightings of an animal continued, but they morphed into what he was calling a monster.  It even became a game...he would knock on the side of the dryer and then run away from the "monster" that lived in there.

I thought it was a simple game, until he started saying that there was a man and a little boy in there.  He didn't give us any details, but luckily doesn't seem afraid or bothered by these things.

The next sightings were of a man sitting in our family room, but again, he wasn't interested in giving us any details other than the fact that he was a "mean man."  In another incident, he saw a man in a nearby hallway and we were able to get a few more details out of him.  Luke described THIS man as being tall, thin, and with dark hair.  Things really culminated just recently when in two separate incidents he again saw a man in our living room.

Our living room does have some interesting history attached to it, lol.  Several independent visitors to our house who have claimed to have had psychic abilities believe that there is a "vortex" of sorts on the wall behind our couch, and over the years of living here, we have had quite a few sightings in that room.  Just recently, however, we bought a new set of furniture.  We got the couch, love seat, a chair, a table, and several pillows from my boyfriend's uncle who had gotten them for a mere $200 from a nursing home in Kanawha City.  The reason he was given for this excellent price was that the set was in the nursing home's TV room, and since no one ever went in there, he didnt' need the set any longer.

Of course, I immediately started teasing my mom that someone had probably died on the chair (which was her favorite piece) and that was the reason why no one would go into the TV room at the facility.  Lo and behold, within days of making that statement, we all started seeing the misty apparition of an old man sitting in the chair, getting up.  The way he was positioned, we couldn't make out his face, but that he was a bald man who was laboriously getting up out of the chair.

Then, several days ago, I was sitting in the "haunted chair" while Luke played with his cars on the ottoman.  He stopped what he was doing, looked up and over my right shoulder and pointed.  He said "man."  He kept pointing and saying man.  He then patted his own head and started saying "boo-boo."  I was concerned that he had a boo-boo, but when I asked him about it he was adamant that it was the MAN who had the boo-boo on his head, and that it was red.

Luke has also recently shown possible photo-scrying abilities.  He was looking at an old photo that I had in my Whipple Company Store file, and he was busy pointing out the things he saw in the photo, including cars, some trees....and a ghost, lol.  Right between the building and the railroad tracks, where many of the ghost sightings and verifiable deaths have occurred, Luke pointed with his tiny little finger and said "ghost there!"

I always wondered if I would have to deal with something like this when Luke got older, as he comes from rather ghostly beginnings anyway.  He was conceived at the haunted Lowe Hotel, and was born in the Haunted Thomas Memorial hospital, where I had plenty of interesting things happen all throughout my pregnancy.  A ghost may have also been responsible for his being born premature...but that's another story, lol.

Luke comes from a long line of women in my family who have exhibited a greater than average sense of intuition, and everyone who meets him says despite his aspects of immaturity, it feels like he's an old soul.  He truly is empathic to those he's around, and I've often wondered, even if albeit facetiously, if he could read my mind, as he always knows exactly what I'm thinking, where I'm at, or what I'm about to do.  I guess we'll see where things go from here...but I've got Chip Coffey on speed dial just in case! 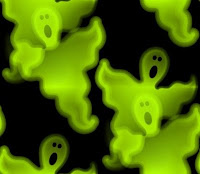 I'm a paranormal researcher and investigator.  In other words, I'm broke, lol.  This is an expensive lifestyle, and one that doesn't really pay off monetarily.  I can appreciate a good freebie, so that's why I enjoy sharing with YOU some totally FREE resources whenever I can.  Several months ago, I posted a list of free Kindle downloads on a variety of paranormal nonfiction topics.  This month, I'd like to shake things up a bit with some totally free documentaries that can be found in their entirety on YouTube.  Enjoy!

1. Vampire Secrets--This History Channel special looks at the legends surrounding the vampire mythos, and even discusses the modern vampire subculture.  If your only exposure to Michelle Belanger has been through Paranormal State, you're in for a shock, lol.

2. In Search of History: The Real Dracula--there are a few similarities to the Vampire Secrets documentary, but this one concentrates more on the historical basis for Bram Stoker's most famous character.

3. Fastwalkers--Fastwalkers is the NORAD code word for what we know as UFOs.  This documentary on UFOs opens with a monologue from Stan Friedman, so you know its gotta have at least a "little" credibility, lol.  I admittedly haven't watched the entire documentary, but if you can overlook some cheesy formatting and CGI, there does appear to be a good solid base of UFOlogy history.

4. Decoding the Past:  UFOs in the Bible--This History Channel documentary talks about well known events as found in the Bible...but explores the possibility that aliens/UFOs actually played a part in these events.

5. To the Ends of the Earth--This is the weirdest thing I've ever seen, lmao.  A dude sits out in the snowy forest, playing his drum set.  In between "sets" he shares his own stories and well known BigFoot facts.

6. American Paranormal:  BigFoot--This is a National Geographic documentary on the Sasquatch phenomenon.

9. World's Scariest Ghosts Caught on Tape--this is a Halloween staple.  Its been around for awhile, but is still a really fun look at paranormal "evidence."

10. The Best Ghost Cases Ever Caught on Tape--definitely some interesting cases, although I know of several just off the top of my head that have been "debunked," lol. 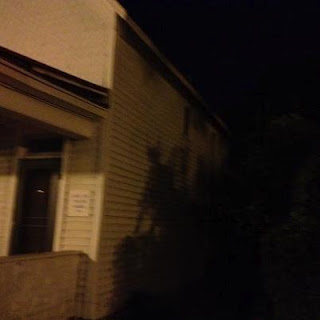 It's Batman!  Or is it Mothman?  Or maybe a demon, a soldier, someone on a ladder, or even Bastet, the Egyptian Cat Goddess?  To the skeptics...is this a forgery, or perhaps a simple case of pareidolia/matrixing?  Whatever you see lurking in the shadows of this historic home, and however you believe it GOT there, most can agree that it certainly is an interesting image!

This photo was submitted to HPIR's Haunted and Historic Guyandotte Tours from a tour patron who visited one of our first ever Full Moon Hauntings tours this past spring!   While fairly comical in appearance, many people feel like the shadowy being closely resembles some type of demonic entity.

Huntington Paranormal is on its fourth tour season, featuring a variety of haunted history tours in historic downtown Guyandotte.  This photo is just one of the many submissions we receive from tour guests and volunteers.  We haven't had a season yet where someone hasn't had some type of experience they couldn't explain.  You, too, can have an opportunity to experience the unexplained, and get a chance to GO INSIDE some of Guyandotte's most haunted and historic locations!

Our next round of tours will be held on Friday, August 24th and Saturday, August 25th.  These are our annual cemetery tours, but this year, we're expanding beyond the iron gates and into several historic (and haunted) properties!  We've also got a few surprises planned for our tour guests, making this year's tour one not to miss.  Can't make it?  Don't fret!  If you're unable to join us in August, or if you'd prefer the full downtown house tours, we have our annual Halloween tours AND our ever popular Guyandotte Civil War Days tours, chock full of history and haunts.

As always, tours are completely FREE and open to the public, but tour slots fill up quickly.  Tours are led by knowledgeable tour guides who have a deep appreciation for the history of the area love to share it with YOU.  The cemetery tour in August will leave from behind the Madie Carroll House.  Early ticket distribution starts at 6pm with the first tour leaving at 7pm.  Please see our website below for full details on this tour, and dates for upcoming events.  We hope to see you there!

Disclaimer:  HPIR and Haunted and Historic Guyandotte Tours are not promoting this picture as proof of the paranormal.  Rather, we'd like to share this image that was so graciously shared with us, and allow viewers to come to their own conclusions.

Theresa's Note:  This may sound a little weird, but I think the image most closely resembles a 19th century mystery creature known as Spring-Heeled Jack.  Spring-Heeled Jack is mostly known for popping up in the UK, but there have been a handful of American sightings.  This mysterious creature's attire was reported by witnesses as being a tight, oil-skinned garment with a fitted, devil-horned mask.  Below is a picture for reference! 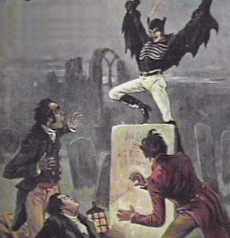