Being a paranormal investigator with a main focus on ghosts and hauntings, I tend to blog about those subjects. But, I'm interested in ALL areas of the paranormal and unexplained and one of the areas I tend to neglect is ufology/extraterrestrials. So, today's Friday Night Funny is dedicated to the alien, lol. I specifically chose today to post this because every time I eat too much and get a bellyache, I feel exactly like this is what is going to happen to me. I hope YOU and yours had a happy Thanksgiving and didn't eat too much! 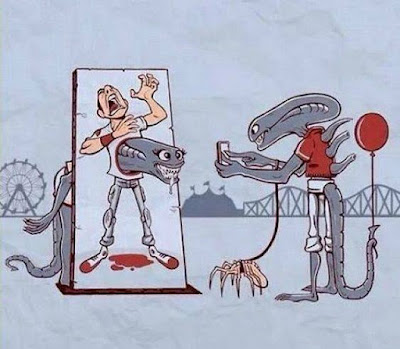 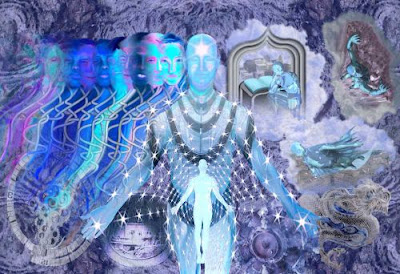 Have you ever visited a place for the first time, yet surprisingly found your new surroundings so familiar that you could swear you've been there before? Have you met someone new that you felt like you've known forever? Have you taken up a skill or hobby with such ease that its almost like you've been doing it for years? If so, you may be experiencing what proponents of reincarnation call "Morphic Resonance."

In her book, Past Lives of the Rich and Famous, the controversial psychic, Sylvia Browne, defines Morphic Resonance as what happens when "the spirit mind finds itself in a place so profoundly familiar from a past life that it experiences almost total recall and infuses the conscious mind with that same, seemingly inexplicable sense of familiarity." It is a result of cell memory, and is not necessarily limited to geographical locations. A place, a person, or even a circumstance from a past life can lead to the infusion of the conscious mind with a sense of familiarity.

I'm sure at one point or another in our lives, whether or not we really believe in reincarnation or not, we've all experienced a similar feeling. I know several years ago when I visited the town of Grafton, WV for the first time, I instantaneously knew my way around without even needing to read the street signs. I knew where to find specific buildings, and what other buildings were used for. When visiting Charleston, S.C. for the first time, I lacked a real clear familiarity in regards to finding my way around....but I felt such a connection for the area and the locals, that I actually felt stabs of homesickness when we had to leave. For the week we were there, I felt comfortable and at home. I've also met many people throughout my life that I had an instant bond with...and a few who I knew from the first time meeting them that they were not good people.

The term Morphic Resonance isn't, however, a product of Sylvia Browne herself. It was actually coined by Rupert Sheldrake in his 1981 book, A New Science of Life. According to the Skeptic's Dictionary, Sheldrake uses the term to '"refer to what he thinks is "the basis of memory in nature...the idea of mysterious telepathy-type interconnections between organisms and the collective memories within species."' He further clarifies that "natural systems, such as termite colonies, or pigeons, or orchid plants, or insulin molecules, inherit a collective memory from all previous things of their kind."

There seem to be some stark contrasts between Browne's definition and Sheldrake's. Browne uses the term to explain how the memories from our past lives can leak through to our current incarnations. Sheldrake tends to take a more practical approach, albeit it still extremely controversial and unproven in the scientific community, by using morphic resonance to explain why living organisms act the way they do...why they seemingly are created with the collective knowledge of their species built in. If you're interested in learning more about Rupert Sheldrake's theories of morphic resonance, I've included an hour-long lecture on the subject below.

Posted by TheresaHPIR at 1:29:00 AM No comments: Links to this post 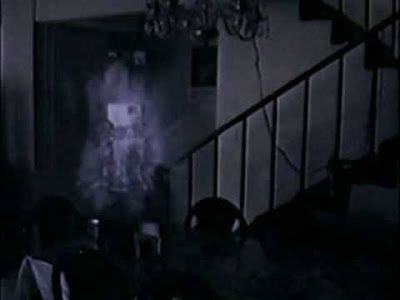 This photo was recently posted to a Facebook paranormal interest group to which I belong. The original poster did not post any accompanying information on the photo, and as of 16 hours after the original posting, had not returned to answer any questions or pose any type of clarification.

When I'm perusing Facebook groups, I tend not to focus too much on the ghost pictures submitted by others. Most often, its just not worth it, lol. That sounds harsh, but its true. Either there is just not enough information or photo clarity to give a good, accurate analysis....or the photo is a natural glitch. Sometimes, the photo is outright fraudulent. These I hate the most because I'm one of those who believe that people are inherently good. I don't think the majority of people posting ghost app photos and other fraudulent photos and/or information are doing so maliciously. Rather, I think people have a tendency to find something cool on the internet and want to share. Unfortunately, some are the victims of pranks by friends who realize their gullibility.

I tend to think this photo is just one of those, 'Hey, cool! Look what I found!' photos. When I first scrolled by and paused, what caught my attention was that I knew I had seen this image somewhere before. Further, while looking at the photo, it certainly didn't look like an image taken with a camera---it had that look of 'film,' like it was a still shot from a movie.  A simple reverse-image search later, and I had my answer.

This image IS a still shot, and it was probably taken directly from the documentary, The Best Ghost Cases Ever Caught on Tape, which aired as a Fox TV special in the early 2000s. This show specializes in taking film footage of alleged ghosts, and explaining or debunking them. While I highly recommend watching the whole thing, I want to bring your attention to the clip at hand. If you fast forward to 26:16, you'll see the clip in question....and the confession that it is the product of a student filmmaker! Oh, and what looks like a robot ghost is actually the mist pausing in front of the refrigerator, lol.


The Best Ghost Cases Ever Caught on Tape Documentary 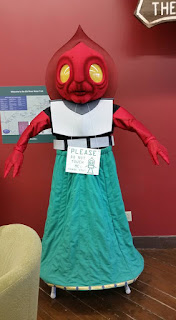 On Tuesday, November 7th, I went with my mom and my sister to Fairmont, WV to spend time with my nephew! Ryan is a Freshman at Fairmont State University, and thanks to early voting, we were able  to take Tuesday to drive up there, take him out to lunch between classes, and get a peek at his dorm. We also met a few of his fraternity brothers, who I was surprised to find were a very nice, polite group of young men....despite the fact that they apparently like dressing up as bananas and roaming the downtown district in their spare time, lol. A shout out for the wonderful restaurant we ate at: Muriale's in Fairmont was an awesome Italian place with great service and great food. If you take advantage of the lunch specials, it's especially affordable.

Anyway, as usual, I had to consult my own blog to see if there were any good ghost stories to explore while on campus. For some strange reason, despite the town of Fairmont being a pretty historical place, there aren't really any ghost stories of any substance that I found. I thought for sure the campus would be filled with the typical college urban legends, but nope. NADA. So, if you know of any Fairmont ghost stories or haunted buildings around the city, please please please comment below or send 'em to me at theresarhps@yahoo.com ! 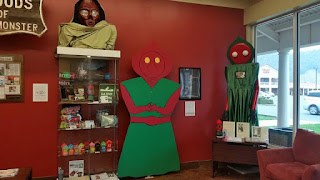 The trip wasn't a complete bust, though, paranormally speaking. Since we had to go through Flatwoods to return home to Putnam County, we decided to stop. My sister wanted to look around the Fiesta Outlet, and I saw a discount bookstore in the same shopping center. While I was walking over to the bookstore, I passed the Braxton County CVB office. I had heard about the display, and wasn't disappointed! One little area of the office was completely devoted to the Braxton County/Flatwoods Monster, complete with models, memorabilia, and two notebooks filled with documents and articles about the 1952 sighting. 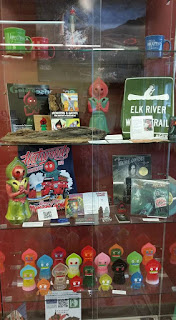 There are a ton of great resources out there to consult for more information on the Braxton County Monster, but in short: In September of 1952, a group of kids playing football witnessed what appeared to be some sort of aircraft fly overhead and crash on a nearby mountain. They rushed to the home of one of the boys, where his mother and a neighbor accompanied the group up a mountain road to look for the crash site. What they found was a strange and creepy THING, that was later theorized to have been some sort of being in a spacesuit or smaller craft.

Seeing the display and knowing that over the past few years the city has really embraced its monster heritage was pretty awesome. However, we weren't done. The county also maintains five Monster Chairs in various locations throughout the area. While we were apparently quite close to two of the five, we went a tad out of our way to the Gassaway Dairy Queen and visited the first chair to be installed. 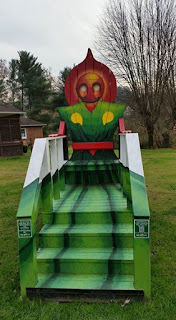 Posted by TheresaHPIR at 11:57:00 PM No comments: Links to this post