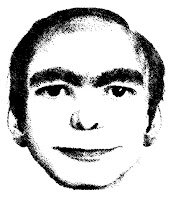 Have you dreamed of this man?  If so, you're not alone.  In the past four years, over 2000 people have come forward, stating they have had recurrent dreams featuring this man.  These people come from all over the globe and from all walks of life...there is no correlating factor that has been discovered as of this date.

The phenomenon began in January of 2006 when a patient of a prominent U.S. psychiatrist drew a rough sketch of a man she had been dreaming about. This man often appeared to her in her dreams, and often gave her advice on issues going on in her private life.

The psychiatrist left the portrait on his desk, where several days later, another patient happened to see it.  This man also claimed to recognize the face, and said that he had recurrent dreams of this man.  Intrigued, the doctor sent copies of the sketch to collegues who were treating patients with recurrent dreams.  Within a few months, four more patients came forward.  All claimed that "THIS MAN," as they called him, would appear to them in their dreams, often giving them advice or comfort.  And, thus...a legend was born.

Several theories have arisen as to why so many people are claiming to see the exact same man in their dreams:

Archetypal-  Fans of Jungian Psychology believe that the man could represent a visual archetype from the collective unconscious.  This man often shows up in times of change, or in times of stress.

Religious-  Some believe that the man could actually be God, or the Creator, and the image represents how the Creator chooses to manifest himself in our world.  Therefore, any advice given by the man in the dream should be followed closely.

Dream Surfer-  A smaller group of people think that this could actually be a real person who has the ability to manipulate the dreams of others.  Further conspiracy theory connected with this explanation believe there is a major corporation or government entity behind the phenomenon.

Dream Imitation- This is simply a fancy way of saying that people see the image, hear the story, and are so impressed by it that they start dreaming of the man for themselves.  This theory is further fueled by the fact that posters advertising the image and asking others to step forward are posted in major cities throughout the world.

Daytime Recognition- One last theory builds on the idea that people can't neccesarily recognize or remember specific details of the faces we dream about.  This image of a man represents an interpretation of undefined facial characteristics.  Personally, I think with the prominent brow and thin mouth, the man looks a little primitive, which could further support this theory.
For more information and additional patient sketches, please visit the official website.

Update June 2010:  There is a movie coming out based on the THIS MAN phenomena!  The plot involves an ordinary guy who must figure out why people he's never met are dreaming about him.  There is some talk that the whole thing was contrived as a viral marketing ploy, but in any event, the movie will be produced by Ghost House!  Check it out!

This Man Homepage
Posted by TheresaHPIR at 6:00:00 AM