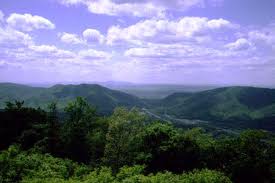 Kate's Mountain is located in White Sulpher Springs, WV. In the 1700s, a couple came to the mountain, which was then still part of Virginia, in order to build a better life for them and their son. According to local legend, the woman's name was Kate Carpenter, and her husband was Nathan.

During this time, attacks on white settlers by Shawnee and other tribes were commonplace, and one day, the inevitable attack came on Kate and her family. Kate's husband grabbed an axe and ordered Kate to grab their son and run.

While fleeing through the woods, Kate was overcome by her attackers, and her son savagely ripped from her hands. Both were scalped, beheaded, and mutilated. A similar fate befell Kate's husband back at their modest cabin.

Shortly after the attack, other locals began reporting seeing a headless woman running through the woods. A woman's scream and the cries of a small child cut short were also heard.

Even today, odd occurrences still are reported...weird lights and an odd humming sound that is associated with causing problems with a car's electrical system.

However, even with all this activity reported...there doesn't seem to be much hard truth to this legend according to other sources because the history has become so muddled over the years.  In a book by William Olcott, entitled The Greenbrier Heritage, the early history of the White Sulpher Springs area is discussed at length, and the text does mention a Nicholas Carpenter and his wife, Kate.  According to the text, the Carpenters settled in the Howard's Creek area around 1750 through a method of "corn rights"---basically meaning they were squatters who began farming the land.

Although there is no formal record of Kate, who was from Staunton, VA, ever joining her husband along Howard's Creek, there IS a local legend that does place Kate in the area.  According to the story, Nicholas was away with the local militia when the valley where the Carpenters lived was attacked by Indians.  Kate grabbed her baby daughter, Frances, and fled into hiding on a nearby mountain, spending several days there before making her way to a nearby settlement and finding her husband.   The townspeople, in honor of her heroic and brave undertakings, began calling the mountain, Kate's Mountain.

After Kate's husband Nicholas passed away in 1752 while fighting Indians, the family moved back to Staunton and Frances grew up to marry a young man named Michael Bowyer in 1766.  Frances and Michael persuaded Kate to sell them the former Howard Creek land, and made plans to move west.  Unfortunately, before the move, both Kate and Frances passed away.

To further complicate matters, there were two other un-related Kate Carpenters in the area.  One did have a husband named Nathan, and the other, whose husband was William, was the victim of either an Indian raid in 1764.

So...it is possible that the ghost stories ARE true...but that the history behind them is a little less clear.  Whomever the mountain was named for, we do know that this was a turbulent time in West Virginia history, and the landscape was scarred by many unfortunate and tragic events of this nature.  Visit the area and come to your own conclusions.

Kate's Mountain is located off Rt. 60 on the road by the Greenbrier Hotel. The hum is sometimes blamed in connection with the formerly secret underground government facilities at the Greenbrier, that extend up the mountain.
Underground Government Facility
Posted by TheresaHPIR at 6:19:00 AM