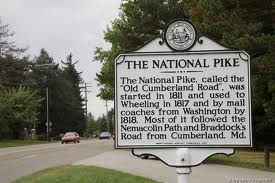 The National Road is the nation's first federally funded interstate highway, conceived in 1806.  Construction began in Maryland in 1811, and today, the road stretches over 800 miles across six states.

The road reached Wheeling in 1818, and it is this area which is reputedly haunted.  Near the Pennsylvania border (Ohio County), the sounds of cannons firing can be heard coming from the surrounding woods.  During the Civil War, the road was used to transport troops, and several minor skirmishes did take place along the route.
Homepage
Posted by TheresaHPIR at 6:42:00 AM