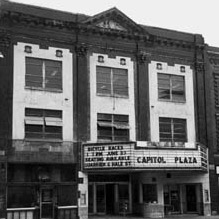 The Capitol Plaza Theater is located on Summers Street in downtown Charleston, WV. Built beginning around 1909 atop of the former Welch Mansion, the theater is now owned and operated by WV State University.

Originally opened in 1912 as a vaudeville venue, the theater suffered extensive fire damage in the early 1920s. It was then renovated and reopened as a movie theater which operated until the 1970s.

In the mid-80s a private organization again renovated the theater, but due to lack of financial success, donated the building to WV State [College] as a tax write-off.

Two ghosts are said to make their home here. The first is John Welch, the protective prankster of the building.  He is often seen by performers, sitting in the front row of the balcony, stage left, during performances.  It is John's spirit who is also claimed to be the cause of a foreboding feeling often felt when going through the doors to the projection booth.

The second ghost here is his daughter, Molly, who died in 1840 from pneumonia. She is the shy one, but can sometimes be seen sitting in the theater's balcony, or playing backstage. Although considered the shy one, Molly is also considered to be the more helpful and friendly of the two, even attempting to help a performer with a costume change!

Cinema Treasures
Posted by TheresaHPIR at 6:23:00 AM