One night in a fit of boredom, I scoured the net, cherry-picking all the paranormal Chuck Norris "facts" and compiling them for YOUR reading pleasure.  Enjoy! 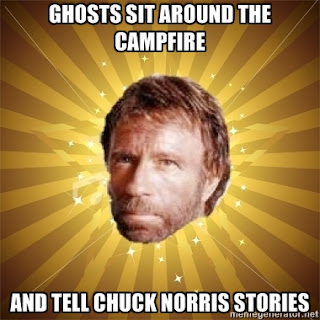 1. Crop Circles are Chuck Norris' way of telling the world that sometimes corn just needs to lie the f*ck down.

2. Aliens DO exist; they're just waiting for Chuck to die before they attack.

4. When the boogeyman goes to sleep, he checks his closet and under his bed for Chuck Norris.

5. Ghosts are actually caused by Chuck Norris killing people faster than Death can process them.

6. Chuck Norris was fired from the Psychic Friends Network for always predicting pain.

8. The Bermuda Triangle used to be the Bermuda Square until Chuck Norris roundhouse kicked one of the corners off.

10. The human soul DOES exist-and Chuck Norris finds it delicious.
Posted by TheresaHPIR at 5:07:00 AM