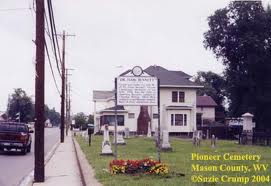 Sometimes referred to simply as Pt. Pleasant Cemetery, this small collection of graves is the final resting place for many of the early settlers and notable landowners of the Ohio Valley.  When George Washington first surveyed the area that is now Pt. Pleasant, WV, the year was 1770 and the area was still part of Virginia.

Around 1772, plots of land along the Ohio were deeded to various soldiers for their service in the French and Indian War.  One of these men was a German emigrant named Col. Andrew Waggener, who is buried in the cemetery.  Waggener received 3400 acres, on which the town of Hartford now stands.  Signage in the cemetery notes that he was a hero of Craney Island, in the War of 1812.  Its debatable as to whether or not Waggener actually LIVED in the area, but he and his wife are buried here.

Two Revolutionary War veterans also are interred here.  John  Roush, along with six brothers and two brothers in law, all served in the Revolutionary War, and are all said to be buried within a ten-mile radius of each other.  Roush was born in 1742 and was a Captain in the Shenandoah County Company.  He was a purchasing agent for a 6000 acre tract of land above Point Pleasant, and when his mother died in 1796, he and his brothers moved to the area.  He was the first sheriff of Mason County and a lay evangelist with the Lutheran Church.  He and his wife, Dorothy, had no children.

The other notable Revolutionary War veteran is John Michael Roseberry. He was born in 1761 in New Jersey, the son of Michael Roseberry and Mary Mapel.  He died in 1855.  A marker erected by the Col. Chas. Lewis Chapter of the Daughters of the American Revolution in 1925 states that Roseberry was with George Washington at Valley Forge.  He is buried alongside his wife, Florence Cree.

Perhaps the most interesting individual interred within, is Dr. Jesse Bennet.  Certainly, he seems to be the most flashy, lol.  Dr. Bennet is credited with performing the first Caesarian  operation in the country in 1794, when he made the decision to try to save both his wife and his unborn child.  Both his wife, Elizabeth Hogg, and tiny daughter survived the operation.  He is also noted for his service as a colonel of the Virginia Militia, and his refusal to aid in the Burr/Blennerhassett plot.

Dr. Bennett was actually buried in his family plot along Lock Rd., but was re-interred in Pioneer Cemetery in 1985, along with his 16 foot monument.  It is said that he was buried in a glass topped coffin, and his shirt was decorated with diamond shirt studs.
More Info and Pictures
Posted by TheresaHPIR at 4:51:00 PM