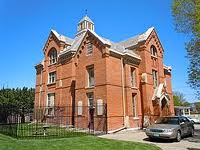 Built in 1884, the Pottawattamie County Jail is literally a one of a kind structure.  It was known as the "Squirrel Cage," because it was built as a 3-story rotary jail.  Prisoners were housed in pie wedge shaped cells, and a hand crank was used to line cells up with a single door located on each floor.

This unique design was invented by William Brown and Benjamin Haugh in 1881.  The Pottawattamie Jail was only one of 18 of these ever built, one of only three that are still surviving, and the ONLY three story rotary jail built.

The jail was built on the former site of the St. Paul's Episcopal Church morgue, and cost $30,000.  Construction was overseen by superintendent J.M. Carter.  After the jail was completed, Carter made his home in the 4th floor jailer's apartment.

The jail closed to inmates in 1969, and is now operated as a museum.  During its almost 90 years in operation, the jail saw very few deaths.  In 1932, an officer accidentally shot himself.  One inmate died of a heart attack, one hung himself in his cell, and a third died from injuries sustained after a three story fall; the inmate fell during an attempt to write his name on his cell's ceiling.  However, none of these deaths are believed to be connected to any of the hauntings.

Although tour guides and visitors to the museum are responsible for most of the ghostly reports, jailer Bill Foster started making claims as early as the 1950s.  Foster refused to stay in the fourth floor apartment.  Apparently, he felt safer lodging in the second story prisoner level, than with the "strange goings-on," such as the footsteps, he heard on the fourth floor.

One tour guide believes the spirit of J.M. Carter is responsible for the hauntings.  It is believed that he spent so much time at the jail, that even in death, he chose not to leave.  Others believe that the culprit is none other than Otto Gufath, another jailer.  Gufath's full-bodied apparition has been sighted on the fourth floor.  Still, others believe the jail to be haunted by the spirit of a young girl.  Visitors have felt the tugging of a small child on their clothes, and she's even been seen in a locked cell, wearing gray and a mournful expression.

Several investigation teams have investigated the jail, and have caught cabinets opening and closing, photographic anomalies, unexplained lights, and a feeling of being watched on the third and fourth floor.