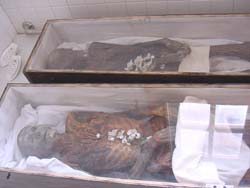 In the late 1800s, local shopkeeper/undertaker Graham Hamrick became obsessed with discovering the secrets of the ancient Egyptian mummification practices.  The resulting end was a mixture of water, saltpeter, sublimed sulfur and a host of other 'secret ingredients' set afire, for which he was actually able to obtain a patent (#466,524) in 1892.  As stated in his patent application, the process was a "simple and economic way for anyone 'without special skill' to effectively preserve a body in its natural condition for a long time."

After success with various vegetables and animals, Hamrick needed human subjects to test his practice and solution on.  In 1888 he secured two unidentified female corpses from the Weston State Hospital.  In addition to the two females, it is said that Hamrick also mummified a human hand, the head of an adult male, and the body of a baby.

The Smithsonian was so impressed by Hamrick's success that they offered to put the mummies on display if he would reveal his secret ingredients.  He respectfully declined, but that didn't stop the two female mummies from becoming internationally renowned.

In 1891 the mummies went on tour with P.T. Barnum, traveling extensively throughout Europe as part of the side show attraction.  After their return to WV the mummies made sporadic public appearances...first in John Comstock's Mountaineer Hall of Fame in Richwood, and then in the mid 1960s during Phillipi's Street Fair.

After that, the mummies disappeared from the public eye.  They resurfaced in 1985 after a devastating flood which left them floating from their storage area in the house of Frank Beyer...and covered in a green mold.  A local concocted a mixture which effectively removed the mold from the mummies, but unfortunately removed all their hair as well. Frank turned over ownership of the mummies to the state, but the mummified hand still remains in possession of his daughter.  The head and the baby are as of right now missing.

Today the mummies reside in a remodeled bathroom of the Barbour County Historical Museum, where again in 1994 they received damage by flooding.  They are now kept in glass topped cases and are shrouded with sprigs of white flowers.  For $1 you can see them on display complete with jugs said to contain the secret mixture of mummification and various newspaper articles featuring the two over the years.

So what happened to Graham Hamrick?  No, he wasn't mummified, but it wasn't for a lack of trying!  Upon his death, Hamrick left explicit instructions and formula for his body to be mummified.  However, his assistants were too squeamish, and he was instead buried in Mary's Chapel Cemetery.  (Photo property of Virginia Wind).
Posted by TheresaHPIR at 6:08:00 AM