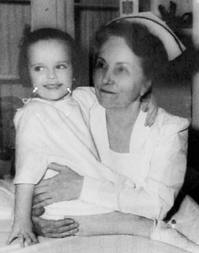 This comes straight from a Parthenon article by Sarah Altmeyer

"River Park Hospital, located at 1230 Sixth Ave., has not always been a psychiatric hospital. The building started as an orthopedics hospital in 1923, then it became the Huntington Hospital before finally becoming the River Park Hospital.

"I was walking down the hallway on the fifth floor and the hair on the back of my neck stood straight up and I had the most overwhelming feeling shoot straight through my body," Donna Swiger, a registered nurse who has worked at River Park Hospital for 10 years, said. "My shift supervisor turned to me and said I just had my first experience with Edith."

Jennifer McVey-Holley, director of community relations at River Park Hospital, said the employees have reported strange sightings at the hospital. McVey-Holley said the staff is convinced a ghost named Edith haunts the hospital.

Edith Miller, a registered nurse, helped start the hospital in 1923.

Employees at the hospital said Edith is a friendly ghost and she is just checking to see if everything is running smoothly.

Some of the employees said they find it eerie when the elevator doors open when no one is in sight.

McVey-Holley said she hears various reports from employees about cold spots in the hospital, which often feel like a human presence. She said other reports, such as hearing someone walk down the hallway only to find no one is there and lights turning on and off have mysteriously occurred.

McVey-Holley said most employees report incidents on the fifth floor, where Edith's office was located.

Swiger said Edith's office is now where the record room is located. The nurse supervisors used to use Edith's room as their office, Swiger said. The supervisors did not stay in the room for long. They moved into a different room because they reported that they could feel Edith's presence.

McVey-Holley said Edith is not interested in hurting anyone. Edith is a positive spirit because she is looking out for all the employees.

McVey-Holley said, in a joking manner, everyone knows about Edith. She said the hospital should have an orientation program for the new employees to prepare them for their first experience with the ghost."

More information on this location is discussed in detail in Theresa's Haunted Huntington, Volume I.  Join me on Face Book to see how you can order YOUR copy!
Posted by TheresaHPIR at 8:47:00 AM