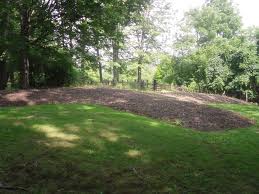 In early May, 1862, Union troops under the supervision of Colonel George Crook were camped on the present day site of Carnegie Hall, overlooking Lewisburg's downtown historic district.  The 3rd Provisional Ohio Brigade, who was there as a part of the campaign to cut off railroad communication between Tennessee and Virginia, consisted of members of the 36th Ohio Volunteer Infantry, the 44th Ohio Volunteer Infantry, part of the 2nd (West) Virginia Cavalry, and two mountain howitzers.

On the morning of May 23rd,  Confederate troops under the command of Gen. Henry Heth advanced from the east.  2300 men from the 22nd Va. Infantry, 45th Va. Infantry, a detachment of the 8th Va. Cavalry (dismounted), and two untrained militia battalions under Lt. Col. William Finney and Major George Edgar opened fire at 5am from atop the ridge that now holds the cemetery.

The Ohio Brigade charged...sending infantry down both the left and right, and the cavalry to charge down the middle.  After the left side fell first, the Confederate's middle was wide open, and they made a hasty retreat across the Greenbrier River, burning the bridge behind them.  The battle only lasted a little over an hour, and it is said that Heth blamed the untrained militia units, and a lack of artillery on the defeat.

While lasting only a little over an hour, thirteen Federals were killed, with another 53 wounded, and seven missing.  The Confederates lost 80, while another 100 were wounded, and 157 were captured.

The nearby Old Stone Presbyterian Church was used as an emergency hospital during the battle, for both Union and Confederate forces.  Following the battle, the unclaimed dead Confederates were laid out in front of the church, later being buried along a trench on church/cemetery property, because Crook refused to allow the southern sympathizers to bury their dead.

It wasn't until after the war, approximately 1870, when the victims of the Battle of Lewisburg were joined by several unclaimed Confederate dead from the Battle of Droop Mountain (Nov. 6, 1863) and reinterred in a mass grave up the hill from the Old Stone Church, along the same ridge where they had suffered their defeat.

The mass grave is marked by an earthen mound in the shape of the Christian cross.  The cross measures 80x40 feet, is approximately 10 feet wide, and raises about three feet high.  It contains the remains of 95 unknown soldiers, many of whom died in the Battle of Lewisburg.  The head of the cross is marked with a commemorative plaque, erected in 1956 by the Federal government, and three individual graves are located on the small property...the graves of Captain J.W. Brannam and Col. Mordecia Halstead flank the left upper corner of the cross, while the grave of J.W. Rogers sits alone on the right.

The site is now listed on the National Register of Historic places, and is featured on the Civil War Discovery Trail.  It is noted as being one of the largest Confederate only cemeteries in West Virginia, but also as the only cemetery of its kind in the state to utilize such a unique landscaping feature.  Foot traffic can reach the cemetery along a walking path from Maple Street, while the cemetery can be reached by car along McElhanny Road.
Posted by TheresaHPIR at 4:49:00 PM