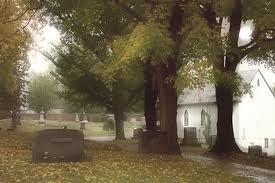 The year Huntington was established, the city set aside almost 30 acres for use as a public cemetery.  The land was purchased from Collis P. Huntington's Central Land Company and named after the Old Spring House nearby.

The first official burial was for Josephine Webb, which took place in 1873.  However, the 1838 grave of Elizabeth Prosser was already erected in a field included in the acreage, so its listed as the "unofficial" first burial for the cemetery. As a spooky side note---there is an old southern belief that the first person buried in a new cemetery is destined to become that cemetery's protector, or guardian. Their spirit is said to remain on earth, protecting the sacred site until called home. So, who would be the Graveyard Guardian in this case...Josephine or Elizabeth? Anyway....

The original cemetery included a potter's field, although today, all such burials are reserved for the Highland Cemetery.  Over the years, as the city grew, small family cemeteries were relocated to the grounds of Spring Hill. Gen. Albert Jenkins was moved here in the 1920s, and is buried among 300 civil war soldiers.  A brick chapel on the grounds now serves as a sales office, but originally held funeral services.  A yellow sexton's house was located near the side entrance, but has since been torn down.  The last sexton was Arden Ross, who retired in 1998.  The superintendent now looks over the cemetery, but does not live on the grounds.

During the 1903 smallpox and the 1918 flu epidemics, many victims were buried here, some in the potter's field section.  Rumor has it that some of these were buried in mass graves.  What is known is that many of these flu victims did not have any funeral service due to the widespread contagious nature of the illness.  One such family had a grandfather (William Alfred Bias) who passed away during the 1903 smallpox epidemic, and was buried one day along with dozens of others.  Several of his sons sneaked out and waited outside the fence near the family plot for his burial to take place.  When he was placed in the ground, the boys said a few prayers, but then noticed a ball of light hovering above the grandfather's grave, which slowly lifted up and floated away.  The boys followed it all the way home, where it went through the front door of the house with a thud. This story, as told by Betty Burns Lusher, can be found in The Greenbrier Ghost and Other Strange Stories, by Dennis Deitz.

Today, there are still rumors of the cemetery being haunted.  There is some belief that the hauntings are connected to the many flu/smallpox epidemic victims, or even with the old Huntington State Hospital across the street. Whomever the ghosts may be or wherever they may come from, its important to note that not ALL the perceived paranormal activity found in Spring Hill is what it seems! A local newspaper article from 1911 tells the story of the sexton for Spring Hill Cemetery deciding to play a little prank on some young lovers that were using the cemetery grounds as a rendezvous spot. He climbed into an empty coffin, made some spooky noises, and then jumped out at them. Needless to say, they never came back.

More information about the history of this cemetery can be found in Joseph Platania's Huntington Quarterly article, issue 49.