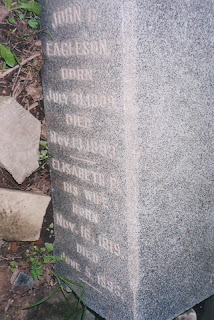 Off an old dirt road off of Union Lane outside of Chillicothe is the Mount Union-Pleasant Valley Cemetery.

Mt. Union's claim to fame is that it is the final resting place of Elizabeth...and possibly where she died as well.  There are two major stories to the Elizabeth legend.  In the first, Elizabeth, overcome with grief over the death of her husband, hanged  herself from a tree near the rear of the cemetery in which her husband was buried.  In another variation, Elizabeth was murdered in a similar manner by several men angry over her inheritance upon her husband's death.  In both legends, the story goes that Elizabeth was buried near the front of the cemetery.  However, her tombstone mysteriously moves itself to the back of the cemetery near the location of her death, most often against the very tree from which she hung.  When replaced, it would always wander back to the rear of the cemetery.

The cemetery has been vandalized, and Elizabeth's grave is undoubtedly among the destruction.  However, therein may lie supporting evidence for the legend.  In the back of the cemetery is a group of fallen tombstones piled near a tree.  One such is the stone of Elisabeth P. Eagleson, born November 16,1819, and died June 5th, 1896.  Elisabeth was the wife of John, who died two years before.

Thrill seekers and paranormal investigators still flock to this location.  It is rumored that Elizabeth/Elisabeth still walks the cemetery, often seen in a white dress.  Sometime she is seen hanging from the tree where she lost her life, and some even say that on the anniversary of her death, blood drips from the tree in question.  A few people claim that apparitions of Elizabeth/Elisabeth are accompanied by the apparitions of two shadowy men dressed all in black.

Witness Encounters with Elizabeth from Forgotten Ohio
Posted by TheresaHPIR at 3:20:00 AM