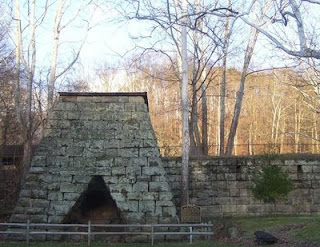 Lake Vesuvius is located in Lawrence County, and is part of the Wayne National Forest.  The furnace located at Lake Vesuvius was built in 1833, and was one of at least 60 such pig iron furnaces located in the Hanging Rock area of Ohio.  By 1863, the furnace was operating under William Firmstone.  It had switched from the "cold blast" method to the "hot blast" method of production, and was producing 8-12 tons of pig iron a day.

Shortly after the Civil War, the iron ore seams of the Hanging Rock area were disappearing, and operations were moving north to the Lake Superior region.  Vesuvius Furnace, as a result, closed officially in 1906.

In the 1930s, the land around the furnace was purchased by the government, and in 1937, the Civilian Conservation Corps (CCC) moved in and began construction of a dam, cabins, boat and bath houses, etc.  Work was completed in 1941, and the new dam had created Lake Vesuvius along the Stormy Creek.

In 1966, a cave was found in the area, on property belonging to the Haney's.  Artifacts found in the excavation indicate that the cave goes back at to at least 700BC and was used by Shawnees, Mingos, and several other traveling tribes as a shelter.

By 2001, the dam was deemed unsafe.  The lake was drained, the dam rebuilt, and the entire camping and recreational area was reopened in 2004.

There are several ghost stories and legends connected to the area, the first being directly related to the furnace, which is still standing.  While the furnace was in operation, it was reported that workers encountered the Devil himself in human form.  The Devil blocked the path daily, and so disturbed the workers, that the owners were forced to hire in a priest.  The priest is reported as asking the Devil, "What in the name of God do you want?"  The Devil either did not respond, or no answer was ever recorded.  For more sightings of the Devil in and around Lawrence Co. Furnances, please see this link!  It seems as if the year 1875 was quite an interesting time for people of this area.

Several other ghosts are also said to roam the vicinity of the lake.  One appears to be a man wearing a cowboy hat who is seem simply walking along the paved roads with his head down.  When people turn to take another look, he has vanished.  A second ghost is that of a woman. The woman is seen primarily along the dock area of the lake, but has also been reported on the road.  She appears in rags, and is bloodied and bruised and disheveled...almost as if she has been beaten to death.  A third sighting involves a vaporous white figure that floats among the trees.

These seem to be the most heavily reported ghosts, but  in recent years, at least two others seem to have surfaced.  It is said that an elderly woman is seen relaxing in a rocking chair located at one of the CCC cabins.  The last is the apparition of an Indian tribesman.  He is seen mainly around the wooded areas and along trails.

In 2007, HPIR had its first anniversary picnic at Lake Vesuvius, and although we didn't see any of the above-mentioned ghosts, everyone had a great time in this great location.  We did capture a strange image of what appears to be a colored orb at the furnace.  Generally, HPIR is NOT with the orb camp, but this particular image was interesting enough to give a second glance to.

Update May 2009:  I've learned from the Forgotten Ohio website that another ghost is directly connected with this area.  In the nearby mine area, the ghost of a former miner who died from a mining accident is often reported.  He is seen pushing his wheelbarrow out of the opening of the mine, walking around for a few moments, then re-entering the mine.

History of the Vesuvius Furnace
Posted by TheresaHPIR at 4:09:00 AM