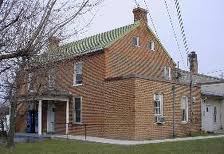 The Old Hampshire County Jail is located in Romney, in Hampshire County.  It was built sometime in the late 1700s, and has seen continuous use as a government building.  The building officially closed as the county jail in 2000, when the new regional jail, The Potomac Highlands Regional Jail, opened in Augusta.  Today, it houses the Hampshire County Sheriff's Office, Law Enforcement Division.

The structure consists of a brick house in front where the jailer and family lived, with the prisoners being housed in the back block section.  A steel vault-like door secured the entrance between the jail and the residence.

Legend states that in the late 1800s, a sheriff was murdered on the staircase leading between the jail and the home.  He was gunned down by a group of bandits who were breaking an accomplice out of the jail.  The sheriff was shot at the top of the stairs, and subsequently, tumbled to the bottom.  It is said that the sounds of the sheriff tumbling down the stairs can still be heard late at night.

The old jail is open for tours by appointment and during the Heritage Days festival.  Stop in for a tour and see for yourself if there is any truth to these legends!
Posted by TheresaHPIR at 8:08:00 PM