It's been awhile since I've posted a Friday Night Funny.  Luckily, on Wednesday I came across this little gem of grave humor and couldn't wait to share it!  This amusing anecdote comes from the Huntington Advertiser in an article dated June 6, 1911 and features one the city's most prominent burial grounds.  This particular cemetery has long had a reputation of being haunted by real ghosts and spirits...but maybe not all the stories are what they seem!  (For the ghost stories, check out Spring Hill Cemetery on Theresa's Haunted History!) 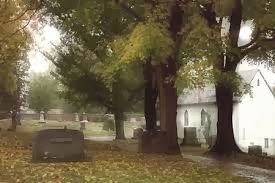 Col. A. F. Southworth, recently returned from Little Rock, Ark. and is authority for the following story, which he alleges was told by Rev. W.J. Cocke, a veteran of the war, now sexton at Spring Hill Cemetery.

It concerns a youth and a maiden fair who were wont to roam about the cemetery grounds in the cool shades of twilight.

Now and then the sexton would discover the pair of lovers, in a secluded nook engaged in that phase of love-making called "spooning."  For many days the sexton watched the couple and smiled upon their happiness.

It occurred to him one day, however, that they might be fit subjects for a joke which he accordingly prepared.  He climbed into an empty coffin and closed the lid as they were approaching one evening.  As they drew near he made noises indicative that some supposed corpse was howling about being put in a coffin before he was dead.

The poke worked.  The lovers separated in their fright and fled in desperate haste when they saw the corpse, or ghost, or what-not, climb out of the coffin.  The boy went in one direction and the girl went in the other, climbing a wire fence in her hurry, and leaving thereon a goodly portion of her gown.

"They never came back," said Sexton Cocke, concluding his story.

Theresa's Note:  I did a little extra research to make sure that Sexton Cocke was in fact in charge of the Spring Hill Cemetery, and indeed it appears he was.  He's actually the Reverend William Joseph Cocke, who also later served as the chaplain for Huntington State Hospital, located just across the street from Spring Hill Cemetery.  Rev. Cocke passed away at the ripe ol' age of 94 on December 8, 1938.  He outlived two daughters, Rebecca (died 1901 at the age of 21) and Irma (died 1923 at the age of 44).
Posted by TheresaHPIR at 8:00:00 AM