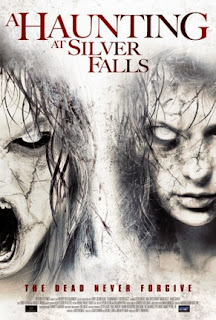 Long-term readers of the blog might remember that starting every October, I challenge myself to watch as many horror flicks as I can manage, then review them in a weekly re-cap.  Each year, I fail miserably at the number of movies I actually end up watching!  So, to switch things up a bit this year, I'm just going to take more time reviewing individual movies and not worry so much about the numbers; quality over quantity, right?

Anyway, A Haunting at Silver Falls claims in the opening credits to be "inspired by actual events." I haven't found what those actual events are, other than several mentions that the director, Brett Donowho took the inspiration from reading an article about the unsolved murders of two twin girls (and honestly, don't really care enough to look into it further) but I did find  the movie was shot in and around the REAL town of Silverton and incorporated loosely some actual components of the town.  Seventeen year old Jordan has been living in L.A and is the star of the movie and main character.  Her mother died when she was five, and when her father suddenly died (apparently two weeks ago) she was sent to live with her mom's sister Anne, and her husband Kevin, in the small Northwestern town of Silver Falls.  She doesn't actually KNOW these people, though, and the reason she was given as to why they never visited was because the aunt looks so much like the deceased mother that it would have been hard on Jordan's father.

Jordan settles right in to her new life, and immediately begins dating the slightly nerdy Valedictorian who takes her on a date to a local party spot near the very haunted Silver Falls.  Cops bust up the festivities and Jordan gets separated from her new love, who it turns out gets arrested.  The local bad boy drives her home and begins his creepy pursuit of the pretty new girl.  However, while lost briefly in the forest, Jordan finds a ring which would ultimately change her life forever.  She begins being stalked first by one, and then two dead girls...the ghosts of twins murdered 20 years before.  Its up to her to find out why and what message they are so desperate to pass on to her.

Overall, I give this movie a strong 2 out of 5 stars.

The acting was solid and the story was interesting, at least to me.  I LOVE movies where the main character has to solve a mystery with the help of the undead and find out that things aren't exactly what they seem.  This followed pretty closely with that formula, although many would argue that its a little played out.  What I had an issue with was that this movie just didn't make a lot of sense.  There's not enough suspension of disbelief in the world to account for all the things that just didn't add up.  As one reviewer I found noted, it's almost like they threw all the potential killers' names in a hat, and then drew from said hat.  Literally, just about everyone in this town had just enough of a back story that they could have been the guilty party...

I think part of that was because the movie felt unfinished.  I don't know whether there were a lot of cut scenes or that certain plot points were never developed or what, but there are way too many aspects that aren't successfully or satisfactorily explained.  For example, why did the REAL killers start this whole thing and just how old were they when they did??  Further, what would have happened if Jordan wouldn't have told the bad boy policeman's son to eff-off and listened to what he had to say?  Did he REALLY know what was going on, and if so, why didn't he do anything?

And seriously, what the hell was with the psychiatrist?  Who sends a 17 year old girl to visit a death row inmate as an attempt to cure her?  Is that even allowed, considering he's being executed in just a few hours?

So yeah. If you're looking to kill a couple of hours this movie might be a good fit.  There aren't any jump scares, very little gore,  and overall its creepy, but not scary.  This is one of those films that had the potential to be really great, but just fell a little short.  In other words, its a typical Netflix feature!