In 1895, Cass County, North Dakota opened up the Cass County Hospital and Farm along the Red River.  The property was multi-purpose:  it was a hospital which provided the best care possible for the less fortunate, a nursing home for the elderly without family or means of supporting themselves, and a Poor Farm, where paupers of a more sound health could work, providing fresh vegetables, milk, and meat to those being treated at the hospital.

However, around 1935 social security and other such programs were eliminating the need for county farms and state-supported nursing homes.  Elderly patients now had a means of choosing a private nursing home option...which many did.  In order to meet that need and stay afloat, in 1947 the facility became strictly a nursing home facility.  It officially changed its name in 1962 to Golden Acres Haven.  In 1973 the nursing home finally shut down.

The following year, the property transferred to the Fargo Park District.  In 1978, the Trollwood Performing Arts School opened, operating a summer camp style learning facility on the property.  It was during the tenure of the performing arts school that the park truly gained its haunted reputation.  According to numerous sources, whenever a performance was put on, a lady wearing a 19th century dark blue dress would be seen standing or dancing around a nearby willow tree. 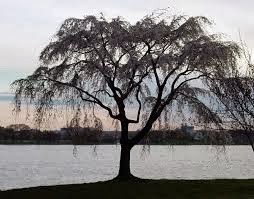 Today, the performing arts school has moved to a new location and the park features playgrounds, disc golf, two gazebos, and two different stages where weddings, performances, and reunions can be held.  And...visitors are still seeing the woman in blue.  Others have experienced phantom touches, the feeling of someone following close behind them in the park, and a disembodied voice calling their name.

Investigation into the paranormal claims by FM Paranormal has yielded some interesting evidence, including several EVPs.  The team also discovered that the willow tree in question is in front of what was once County Cemetery #2, one of three burial grounds used by the old hospital/farm for paupers.  Over the years, the cemeteries had fallen into neglect, even tripping a visitor to the park when erosion caused human bones to stick out from the ground.  Most of the bodies were removed to another cemetery, but obviously, some remain.  It is often theorized that the apparition of the woman (and another apparition of a man from around the same time period spotted less frequently) is related to the neglect of these cemeteries.