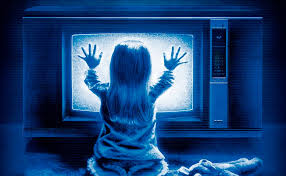 It's been 31 years since the first Poltergeist movie hit the big screen and the iconic horror film trilogy has been scaring the pants off people ever since!  Even if you haven't seen any of the movies, the very image of young Carol Anne kneeling in front of a static-y television uttering those two, horrifying words in that innocent sing-song voice is enough to invoke an innate sense of fear.

But why is it so scary?  We KNOW its just a movie, right?  Of course, but like any good horror movie classic, the very circumstances surrounding the film itself are wrought with legends and alleged "true" paranormal activity!  Let's take a quick look at some of the eerie coincidences that are often cited as evidence of the Poltergeist curse:

Deaths of Cast Members:
Years ago, it was rumored that everyone who worked on the film met an untimely end.  Obviously, that isn't true, but there were at least four notable deaths of cast members that occurred during or slightly after the six year run between the release of the first and last Poltergeist movie.  Two of these deaths were not highly unusual.  Julian Beck, who played Kane in the second film, died after an 18 month battle with stomach cancer.  Will Sampson, who played the shaman died from complications after a heart/lung transplant.  Both actors were older, not in good health, and had been battling terminal issues for some time before their respective deaths.

The deaths of Sampson and Beck are still tragic, but not necessarily evidence of a curse.  Instead, most people point to the very untimely deaths of two other stars:  Dominique Dunne, who played the oldest daughter Dana, and Heather O'Rourke, who played Carol Anne throughout all three movies.

On October 30, 1982, Dunne, who was 22 years old, was confronted at her home by her ex-boyfriend, John Sweeney.  Sweeney had come to reconcile, but when Dunne refused, he attacked her, choking her for an estimated 4-6 minutes.  Dunne passed out and lapsed into a coma.  She died on November 4.  Sweeney was convicted of voluntary manslaughter, and served less than six years in prison.

Heather O'Rourke was just 12 years old when she passed away in February of 1988.  Believed to have been suffering from the flu since January of that year, Heather continued to get worse until fainting at breakfast one morning.  On the way to the hospital, she went into cardiac arrest.  It was later discovered that she had an intestinal blockage, a condition brought on by her previously diagnosed Crohn's Disease, and was experiencing sepsis.  She underwent surgery to remove the blockage, but the toxins coursing through her blood stream were too strong and she died on the operating table on February 1st, shortly before the release of the third film.  Because she died prior to the release of the film, it is debated as to whether or not she had actually completed filming all her scenes.  Her parents claim that all scenes were completed the previous June, but producers claimed that subtle changes had to be made to the script to accommodate her passing.

Other Creepy Stuff:
There were some other interesting things that happened on set or to actors during the filming of the movies, again, most notably the first.  During the first movie, Oliver Robins, who played Robbie, nearly died when one of the mechanical clowns malfunctioned and began choking him.  At first, it was thought that he was a really good actor, but when he actually started turning blue, it was realized that he was in serious trouble.

JoBeth Williams, who played the mom in the first movie, had her own supernatural experiences OFF set.  She claimed that when she'd go home in the evening, all the framed photos on the walls of her home would be askew.  She'd fix them back, but find that the next evening, they'd again be out of place.

So...the above points are the "evidence" that is often presented when the curse is discussed, but WHY would this movie be cursed?  Many people believe that there is a very simple reason for this...simple, but very, very creepy!

Remember the pool scene in the first movie...the part where all the human skeletons pop up, confirming that the subdivision was built atop a cemetery where the headstones were moved but not the bodies?  Those were REAL human skeletons.  Seriously.  At the time, it was much cheaper to purchase human skeletons than ones made of plastic.  In fact, when I was in high school, we still had a skeleton in our science department who was 99% real human remains.  Those same skeletons were used again in certain scenes in the second film. 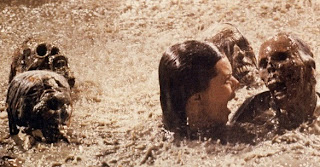 Obviously, the cast wasn't too thrilled with this revelation.  A film about the dangers of treating the bodies of the dead with disrespect using real human remains as props is rather ironic and even prompted Will Sampson, who was a medicine man in real life, to conduct an exorcism on set.

Whether or not the souls of those whose bodies were used in the filming of this series came back to wreak vengeance...or whether or not you believe there is ANY type of curse associated with this trilogy...its still interesting to think about all the coincidences and spooky things that keep popping up with not just THIS movie, but so many other horror movies out there.  In any event, with Halloween barreling its way towards us, the Poltergeist trilogy will inevitably hitting the small screen on at least a few different channels.  If you choose to watch, just remember that the pool scene has a couple of un-credited extra actors involved!


*Check out this REAL Poltergeist story from Texas!*