It's a Pre-WWII Halloween! 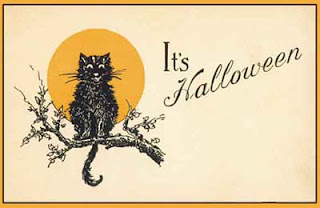 Tomorrow might only be the first day of September, but I'm already excited about Halloween!  Halloween isn't just a one-night holiday in my family...it's really something that is celebrated at least throughout the entire month of October and arguably all year long!

Anyway, several weeks ago I got a really cool magazine from the Nitro Antique Mall auctions:  the October 1941 edition of The Railway Conductor.  When we realized that the cover photo was from Harpers Ferry, I got really excited by the idea that they MIGHT have mentioned the story of Screaming Jenny to coincide with Halloween.  Unfortunately, that wasn't the case, but it DID contain a neat little article on Halloween itself!

The following excerpt is credited only with the fact that it came from an encyclopedia and although it doesn't say which one, its an interesting look back at what Halloween meant in pre-WWII United States.  Enjoy!

"Customs and superstitions gathered through the ages go into our celebration of Hallowe'en or "Holy Eve" on October 31.  The day is so named because it is the eve of the festival of All Saints, but many of the beliefs and observances connected with it arose long before the Christian era, in the Autumn festivals of pagan peoples.

The ancient Druids had a three-day celebration at the beginning of November.  On the eve before, they believed spirits of the dead roamed abroad and they lighted bonfires driving them away.  In ancient Rome the festival of Pomona, goddess of fruits and gardens, occurred at about this time of year.  It was an occasion of rejoicing associated with the harvest; the nuts and apples as symbols of the winter store of fruit were roasted before huge bonfires.

Even after November 1 became a Christian feast day honoring all Saints, the peasants clung to the old pagan beliefs and customs hat had grown up about Hallowe'en.  It became a night of mystery and fun-making with many picturesque superstitions.  Folk came to believe that they could foretell the future on that night by performing such rites as jumping over lighted candles.  In the British Isles great bonfires blazed and laughing bands of "guisers", young people disguised in grotesque masks and carrying lanterns carved from turnips, gathered in each village.  Their rollicking fun and cherished superstitions are described in Robert Burns' famous poem, "Hallowe'en."

Our Hallowe'en celebration today keeps many of these customs unchanged.  Young and old gather to hunt nuts, and to duck for apples bobbing in a tub of water.  Grinning jack-o'-lanterns, rustling corn-stalks and white-sheeted figures create an air of mystery and black paper witches and cats are used for party decorations.

In the north of England, Hallowe'en is known as Nutcrack Night." 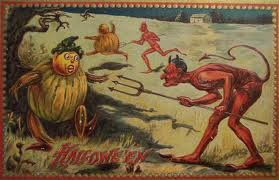