Headless Shadow Being of Route 50 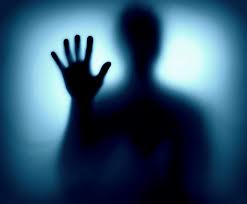 I wanted to take advantage of today's Blog Challenge topic (write about a memory that haunts me) to share with you another personal experience of a ghostly nature.  Having cultivated this interest in the paranormal since an early age, and a having a long history of seeing and experiencing things that I cannot explain, there are very few things I've encountered in my 30 years that really scare me.  Startle me, yes...but terrify me to the point of tears, no.  Therefore, today's story is definitely a memory that haunts me, and quite literally at that!

Nearly ten years ago I was completely in love with a guy who lived in Grafton, WV.  Being here in Winfield didn't exactly make our relationship easy, but we made it work.  At the time, I was going to Marshall and working as a 2nd assistant manager at Dollar Tree.  Sunday shifts at Dollar Tree were an all day shift, so only one manager was on duty the whole day.  So, every other Sunday it was MY day, which generally meant I had that Saturday off.  On each of those weeks, I would leave work shortly after closing on Friday night (9-10pm, depending on season) and drive straight up to Grafton to spend all day Saturday with my boyfriend.

This was a pretty routine trip and I had made it many times.  I'd get off at the Bridgeport exit and travel Route 50 on to Grafton.  Most nights were uneventful, and I made the trip in around two hours or less.

What started out as one of these uneventful trips would terrify me for the rest of my life.  I was driving on Route 50 and as I was approaching a small clearing on the right hand side of the road just past some trees, I noticed an inky black shadowy figure running from the field towards my car at top speed.  My first thought was DEER, so I started to hit the brakes.  Everything from that point kind of went in slow motion.  As I'm watching this thing approach me, I see that its not a deer.  It's not even an animal of any sort that I can make out.

What I see coming toward me is the inky black shape of a man.

All I was really concentrating on was this thing's legs.  Two strong legs ran at a fairly wide stride and as I saw the "foot" hit the white line on the edge of the road, I slammed as hard as I could on my brakes and braced myself for impact.  However, at the same time, I could see that the very millisecond this thing's foot hit the road, it vanished!

Not getting cell phone service in this particular stretch, I panicked and raced on to my boyfriend's house as fast as I could go.  As he came out to my car to greet me, he knew instantly there was something wrong.  I was speaking incoherently and blabbering before just collapsing in his arms and sobbing.  Later when I calmed down, I was able to tell him what I had experienced.

The next morning he suggested that we go see if I could show him the spot where it happened.  In the daylight things looked a lot less ominous, but I noticed something I hadn't before.  The section of road where this happened was in a curve, and out in the field, right in the middle of this curve, was a fairly large tree stump that looked as if it had been struck by lightning---it was charred and jagged.  When I told him this was the spot, my boyfriend got a weird look on his face and asked me what I noticed about the tree.  Apparently, it HADN'T been struck by lighting.  What had really happened was a car full of teenagers had struck it, decapitating at least one of them.  What was even weirder he said, was that it was a local legend that years prior to that, there had been a massacre that left two people decapitated.

I had seen a ghostly image of someone running in the same spot where these two horrific accidents were said to have happened.  Perhaps I had just seen the tree stump and gotten spooked thanks to being tired after a long shift in retail.  Perhaps my boyfriend had made it all up; after all, I still haven't to this day tried to confirm any of these events.  Or, maybe I did see something paranormal.  Perhaps it was a member of the massacred party I saw attempting to flee.  Or maybe it was the spirit of one of the young people trying to get home.  I always thought it was interesting that I don't consciously remember the figure actually having a head, and if it really didn't, and wasn't just a detail that I conveniently forgot, then that could lend some credibility to these alleged tragedies.

At this point, I honestly don't want to know what it is I saw that night.  I want to remember my experience for what it was...but I will admit that it was terrifying.  After that happened, I could NEVER drive alone on that road again after dark.  After one attempt sent me into a horrific panic attack, it became the norm for me to just leave my car at a hotel in Bridgeport and have my boyfriend come pick me up.  This happened nearly ten years ago, yet it is still fresh in my mind, as if it happened yesterday.  It is a memory that will forever haunt me.

*There's another ghost sighting on another stretch of Rt. 50.  Near Salem, a faceless woman in red has been spotted!*
Posted by TheresaHPIR at 9:12:00 PM