Book Review for Slenderman: From Fiction to Fact 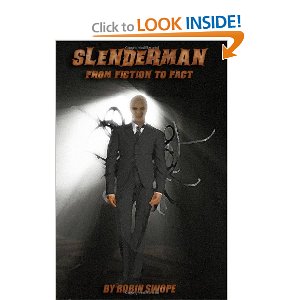 I hope in the near future to bring you a more in-depth post on Slenderman--who or what he is, where he came from, and how he has taken the paranormal world by storm recently.  But first, I'd like to share with you one of the few non-fiction books available on this subject.  (As an added bonus, Day 5 of the August Blog Challenge is to write about a book I've read recently, and this is the latest hard copy addition to my personal paranormal library.)

Several years ago, the mythos of the Slenderman was borne on an online forum called Something Awful.  In a facetious thread designed to show how easily fake paranormal photos could be produced, Slenderman quickly became a huge hit, complete with a creepy back story like no other.  Forum member after forum member contributed to photographs of Slenderman, and stories to go with them, almost all of them involving Slenderman as a watcher and snatcher of children.  To see Slenderman certainly meant untimely death, disappearances, or a lifetime of bad luck.  The entire process was documented as being completely fictitious.

Released to the world, Slenderman began to take on a literal life of his own.  Those not privy to the Something Awful contest swore that they had witnessed Slenderman for themselves!  As more and more stories started pouring in, Slenderman acquired almost a cult following!  Today there are multiple fiction books, games, and other apps all starring the creepy tall, gaunt fellow with a few extra tentacle-like appendages.

In order to combat some of the misinformation and take a scholarly look at who or what Slenderman is and why people believe he is real...and if he actually IS becoming real...Rev. Swope has compiled a history and compendium of anecdotal evidence on the mythos.  Obviously there is an in-depth breakdown of the events on the Something Awful forum, followed by some possible historical nods to Slenderman as an archetype.  Finally, there are plenty of stories from real life people who claim to have experienced this phenomena, and a brief analysis as to whether or not its actually possible that the collective conscious has "breathed life" into the legend, almost in the same manner as a Tibetan thought form.

The author, Rev. Robin Swope, has made a name for himself in the paranormal community as a consultant to many paranormal investigation groups and television shows across the country.  And, being an "actual" minister, his credibility and integrity are held fairly high.  Therefore, this book is a fair look at the myths and legends of Slenderman.

It is well written and entertaining, and the Grammar Nazi in me is pleased to announce that this is one of the better self-published tomes out there pertaining to spelling, grammar, etc. And although there really isn't much in the book that cannot be found for free online, it is compiled all in one place within this book, making it a perfect addition to any paranormal library.  It's also just a great spooky read!


*Want MORE book reviews from Theresa?*
Posted by TheresaHPIR at 7:00:00 AM