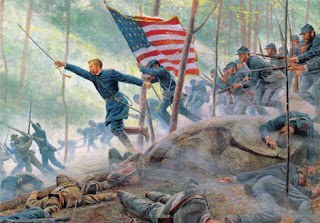 Happy 4th of July from Theresa's Haunted History of the Tri-State!  Today, I'll be sharing a patriotic ghost story from the Civil War.

The Battle of Gettysburg was fought 148 years ago...July 1st through 3rd, 1863.  We all know how famous Gettysburg is for its Civil War ghosts, but did you know that the father of our country (in spirit form), George Washington, is said to have played an integral role in the battle?

The 20th Maine Division, under command by Col. Joshua Chamberlain, claims to have seen the phantom of our country's first president that July day...despite the fact that he had been dead since 1799.  While versions of the tale vary, the basic story is that the division, low on supplies, and confused as to which fork in the path to take, was about to give up hope.  Low on morale as well as the supplies, the men claim a figure in a tri-corner hat, riding atop a white stallion appeared before them and led them to a strategic point on Little Round Top.  The man, who was initially thought to have been a Union commander, was said to have given off a faint glow.  Many men later recalled that the strange glowing man resembled paintings they had seen of George Washington.

The man, still emitting his eerie glow, raised his flaming sword and yelled "Fix bayonets!  Charge!" and led the men down the hill, straight at Confederate troops.  The Confederate troops withdrew, and ultimately, the battle was a victory for the Union.  Secretary of War Stanton investigated the incident only to find all men held fast to their strange tell, including Chamberlain.  To this day, residents and visitors of Gettysburg still claim to see the phantom rider, galloping across the field.
Posted by TheresaHPIR at 2:13:00 PM