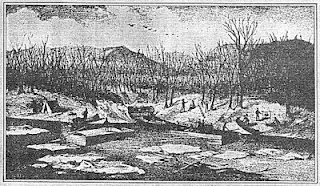 In May of 1773 Thomas Bullit, on the direction of Lord Dunmore, traveled to the Shawnee town of Chillicothe, now in present-day Ohio.  His mission was to ask permission from the Shawnee chief to start settlements in what is now-known as the Kentucky* area.  However, there was a slight problem with that.  The Shawnee, who simply used the area only as hunting grounds, would not even establish their own permanent settlements in that area.  The Shawnee felt they did not own the land...the land was instead owned by the ghosts of the murdered Azgen people.

Allan Eckert's The Frontiersman (1967), quotes this exchange between Chief Black Fish and Bullit, concerning the Azgens:

"The Shawnees", Black Fish said, "cannot tell you that you are allowed to settle in the Can-tuc-kee lands. We have never owned that land. It belongs to the ghosts of murdered Azgens - a white people from an eastern sea. Their bones and ghosts own and occupy every hill and valley of the country. They protect the game there and have more and better right there than any of the Indian tribes, including our own Shawnee nation, because they do not need or use material food themselves and do not like it. Long ago our fathers and our grandfathers killed off the Azgens, but we now fear more the spirits of these people than our fathers and grandfathers feared them when they were flesh."

Black Fish paused and there was a murmured assent and nodding of heads among the assemblage. "When our food is all gone," he continued, "and our squaws and children starving, we appeal to the ghosts of the white mothers who were killed there and, by saying the right words, we are allowed to kill an elk or deer or bear or buffalo. But," and now his voice lost its almost chanting quality and he fastened an unfriendly gaze on Bullitt, "we are never allowed to kill the game wantonly and we are forbidden to settle in the country of Can-tuc-kee. If we did, these ghosts would not rise from their caves and mounds and slay us, but they would set father against son and son against father and neighbor against neighbor and make them kill one another.

So who were these mysterious Azgen people?  This race of white men, often called "Moon-eyed People," for their nocturnal behavior, are steeped in legend.  Some feel that these men were the followers of a renegade Welsh prince, Prince Madoc, who arrived in America somewhere around 1170.  Others feel that the Azgen were from the Lost Colony of Roanoke, while still some feel that this race is actually the descendants of Atlantis.

*Theresa's Note:  The word Kentucky is derived from the word Can-tuc-kee...which is actually derived from another word of the Wyandot tongue, loosely translating into "The Land Where We Will Go Tomorrow" or "The Land Where We Will Live in the Future."  Although it is correct to assume that the area discussed in this post IS Kentucky, it actually encompasses quite a great deal more of land than just our modern state of Kentucky.  In short, Can-tuc-kee was used to describe all land holdings of the Iroquois located along the Ohio River.  The Shawnee lands that they refused to settle in because of the Azgen stretched from all along the eastern and southern sides of the Ohio River.  Obviously, this includes much of West Virginia!  There is also reference to mounds, where the spirits of the Azgen lie...and we've got plenty of those along the Ohio River as well, although most have been plowed over.
Posted by TheresaHPIR at 11:01:00 AM