Not to give away too much information...but with Halloween today, and our tour season about to come to a close, I thought I'd give everyone a chance to experience some of the haunted history of the Guyandotte Methodist Church Cemetery! 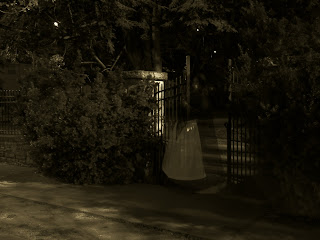 In 1804, the prominent and wealthy Holderby family donated a parcel of land in downtown Guyandotte to be used as a church, a graveyard, and a school.  We have no record of the school ever being built, and the original church is now gone, but what we DO have still remaining is the Guyandotte Methodist Church cemetery...one of the oldest public burial grounds in Cabell County.

Visitors to the cemetery will notice a distinct lack of tombstones to indicate over 200 years of burial.  However, this parcel of land survived not only the 1861 Raid and Burning of Guyandotte, but also the floods of 1913 and 1937, and nearly 100 years of vandalism and neglect.  When taking that into consideration, we're extremely lucky to have what markers we DO have, whether or not they are in their actual correct location.  Today, the cemetery is maintained by the Park Board, who has graciously allowed HPIR to hold an annual tour in September.

HPIR has uncovered many fascinating stories about the lives of those interred in the cemetery.  Here is just a sampling of two of their stories:

Eleanore LeTulle
Eleanore LeTulle came to America with her husband, Victor LeTulle, from the Normandy area of France.  In the 1820s, they settled in the new community of Guyandotte, and ran a grocery business out of their home.  When Eleanor died in 1836, Victor buried her in the Methodist Church graveyard, erecting a fine, and elaborate stone marker in her honor.

Three years later, Victor married his second wife, Nancy Forgey, and built her a house on what is now Guyan Street.  Together, they too ran a baking and grocery business out of the home, all the while taking care of their rapidly growing family.

When Victor passed away in 1853 of pneumonia, he was buried beside Eleanore in the church graveyard.  Nancy continued to live in the home, which still stands today along the flood wall.  When it was Nancy's time to go, her children buried her in the new Spring Hill Cemetery, which was now the popular place to be buried.  Nancy's surviving children, who had never met Eleanore, disinterred their father from his slumber in Guyandotte, and re-buried him along side their mother, Nancy Forgey LeTulle, in Spring Hill.

This action was enough to rouse the spirit of Eleanore LeTulle.  It is said that Eleanore's apparition has been seen walking through the cemetery, down the street to Victor's home, and even IN the home itself, looking for her lost love.

Anthony Lawson
Anthony Lawson was born in England, on Halloween, in the year 1788.  At the time of his death in 1849, he was living in what is now Logan County, West Virginia.  During a return trip from Pennsylvania, where he was conducting business, Anthony Lawson took ill along the Ohio, and passed away here in Guyandotte.

However, it is theorized that Anthony Lawson's body was disinterred, and taken back home to Logan County by his son.  A major clue to this is the inscription on his tombstone, which reads "Sacred to the Memory of."  Generally, when this is seen on a tombstone, it denotes that it is simply a memorial...and that the body is NOT there.  This is seen often on the graves of persons who have died at sea, or have otherwise died in a situation where the body has been lost elsewhere.

Another clue that Anthony Lawson may not be around is the grave itself...it is the only one in the whole cemetery surrounded by an iron fence.  It is also under a large concrete slab that obscures the bottom part of the tombstone's inscription.  These two devices were added in the early 1940s because at that time, the grave of Anthony Lawson was caving in, and becoming a safety hazard.  Although...some believe that these devices were actually put in place not to keep people from getting in..but to keep something from getting OUT!

Anthony is the only person, however, in his family, to meet with mysterious circumstance.  Two years prior to his death, his wife, Ann, was murdered by two of her own slaves.  His grandson had the unfortunate luck to have found himself in the town of Guyandotte waiting on his boat to Pennsylvania the night the Confederates raided the town.  He was taken prisoner, but escaped with his life when it was proven that he was simply in town for business.

In any event, we have discovered over the years of leading various tours that whether Anthony Lawson is at his grave or not, SOMETHING likes to mess with visitors' cameras.  Many people report that their cameras will turn off and not turn back on until they leave the graveyard...only after trying to photograph Lawson's grave.  Others can get their cameras working, but report weird streaks or balls of light, shadows, and other strange flaws on the image.  Is this caused by an influx of natural EM fields, messing with the camera...or Anthony Lawson trying to say hello?  Take a tour and find out for yourself!

The annual cemetery tour takes place each September in conjunction with SwineFest.  The cemetery is also a stop on other tours, but only features a small sampling of the stories.  For more information, see our tour website below!

Photography by Melissa Stanley, HPIR Founder/President
Posted by TheresaHPIR at 3:11:00 AM