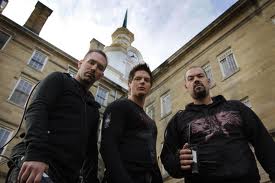 In year's previous, I've brought, for your enjoyment, the Ghost Hunters Drinking Game.  That was before THESE guys hit the paranormal TV circuit.  As Halloween quickly approaches, and weekend-long marathons abound, this is the perfect activity for any party...or lonely night.  Please, drink responsibly!

This is honestly the greatest thing EVER.  Lovingly borrowed from the blog, Common Bonds of Disinterest and Ennui:

1. Drink whenever you see a mustachioed local.
The preamble portion of the show (prior to the night vision Blair Witch extravaganza they call “lockdown") involves talking to a bunch of locals, usually dudes, usually mildly to moderately grizzled, usually admitting they're creeped out about the abandoned asylum/arms factory/lighthouse. Drink to their facial hair.

3. Drink whenever you see a man ring.
Zak is partial to the occasional bold accessory, cuz every ghost's crazy 'bout a sharp dressed man. Feel free to alter this as you see fit -- necklace on black cord, offensive belt buckle, anything with a Celtic cross on it, etc.

5. Drink whenever they say orb.
Known to you or I as dust and gnats, Zak and crew meticulously document any illuminated particle in their field of vision because a ghost is a ghost, no matter how small.

6. Drink whenever Zak says demon or demonic.
Demonic. Demonic. Put your ghosts all over my body.

7. Drink whenever there's an EMF spike.
Because ghosts are "known to be made up of electromagnetic energy." Because A) ghosts exist, duh, and B) nothing else in the universe will register on an EMF detector besides a ghost. Also, ghosts fucking love the song "Unbelievable."

8. Drink whenever the equipment malfunctions.
The cameras routinely go dark on this show, and it's definitely paranormal and not at all because these guys aren't very good with cameras.

9. Drink whenever they present incredibly dubious visual evidence of ghosts.
This is reserved for the slow-mo video or photograph with an arrow pointing to literally nothing.

10. Drink whenever Zak taunts a ghost.
Zak seems to operate with the assumption that all ghost interactions can best be resolved by a Jersey Shore style club brawl.

11. Chug through E.V.P. replays.
The investigators rely heavily on "electronic voice phenomenon," the secret ghost messages found in white noise. When the investigators capture an E.V.P., they will replay the sound bite a few times with a caption. Do not put your beer down until they've stopped looping the ghost whispering his message (usually something like "murder," which usually sounds more like "pudding," or Aaron tripping over something, or wind, or nothing.)
Posted by TheresaHPIR at 1:32:00 AM