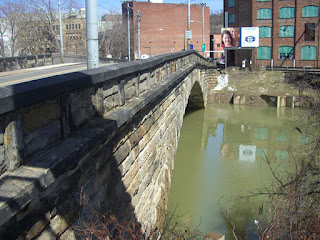 The town of Wheeling, among other attributes, boasts the longest single span stone bridge in the United States.  The famous bridge:  The Main Street Bridge, constructed between 1890 and 1892.  Some sources say that bridge was constructed to replace an earlier bridge, one built in the 1840s.  I cannot find any reliable supporting sources for that, so if you have any info, please send it to me.  I suspect that this may be a confusion with the historic suspension bridge, which WAS completed in the late 1840s.

In any event, the building or re-building in the late1800s was quite a spectacle for the townspeople.  In an effort to enforce safety, a sign was erected which read "Danger! No one is allowed to loaf on this bridge by order of the Board of Public Works."  Pat Weir, the city's watchman, was giving the task of policing the bridge, and dealt with more than one smart-alec who insisted that they were loafing on their own free will, and not by order of the Board of Public Works, thus, it was okay for them to be there.

Whatever diligence was taken to ensure safety unfortunately couldn't prevent at least one fatal accident from occurring.  Dominick Carey, a contractor from the Paige, Carey & Co. of New York apparently fell from the bridge while heavy stones were being moved.  It has been theorized that the scaffolding gave way, and Carey fell into the icy Wheeling Creek, which feeds the Ohio River, being swept away.

Carey's body was never found, but that doesn't mean he was never heard from again...Witnesses say they encounter the apparition of the unlucky contractor on the bridge, as well as another possible spirit.

Allegedly, either the new bridge or the bridge it supposedly replaced, saw another tragic accident.  A gentleman leading a team of horses across the bridge stopped to fix a loosened hitch.  When he dismounted, he spooked his own horses, and they trampled him to death.  Witnesses have reported being approached by a man who asks "Have you seen my horses?"

Bridge History
Info on above Photo
Posted by TheresaHPIR at 12:54:00 PM