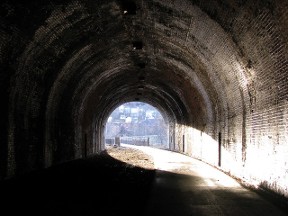 I'm on a Wheeling kick this week!

In 1857, the Hempfield Railroad built a tunnel for their railway, but by 1861, the tunnel right of way was purchased by B & O Railroad.  It was rebuilt between 1904 and 1905, and as many believe, it was built directly under the small Hempfield Cemetery where many bodies were never removed for the construction.

The tunnel has also seen its fair share of deaths.  It is believed that in the early 1900s, a young man was killed by a passing train as he tried to walk the tracks through the tunnel, and another young man, an immigrant, was robbed and killed in the tunnel.

The tunnel was slated for demolition in 1980, but the city of Wheeling stepped in, and took over the tunnel, turning it into a popular pedestrian track along the Rails to Trails project line.  This act not only preserved the tunnel for future generations to enjoy as a hiking/walking path, but possibly preserved the ghosts as well...

Over the years, people have seen a number of spooky things within the tunnel.  They see the apparition of the young immigrant man floating above where the tracks once were.  His bloodied hand rises to cover his badly beaten face, as if fending off his attacker even in death.

Other apparitions are seen hanging from the ceiling of the tunnel, and even dripping a sort of "slime."  It is believed that these are the apparitions of those still buried above the tunnel, rotting and decaying and leaving their mark within the tunnel.

Still, others have seen shadowy forms at the end of the tunnel, that disappear only when approached.  Phantom sounds, such as muffled voices and banging are also heard within the tunnel.  So...the next time you're in Wheeling, cut through the Tunnel Green, as the locals call it (formerly known as the Hempfield Tunnel) on your way to Yesterday's...you may just see a ghost or two!

Update:  I recently read from another source that the small Hempfield Cemetery may actually be Peninsula Cemetery, or one of its reincarnations over the years.  A woman in a black cape has allegedly been seen at this tunnel, matching the description of the one seen at the Peninsula Cemetery.  Please see my entry on Peninsula Cemtery for more information, and if you have any information to clear this up, please let me know!
Posted by TheresaHPIR at 12:24:00 PM