Mrs. Sayre and the Ghost Pilot 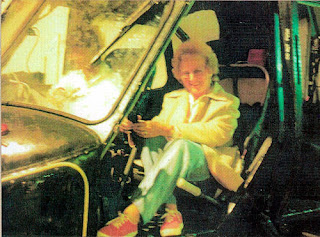 There's not a whole lot of information out there on this photo, so an update may be in order if I find any additional information.  As of right now, here's a brief recap of description given on other ghost sites...one that apparently has been taken word for word from an original (and unknown to me) source, plus a few additional facts that I managed to scrounge up!

On a warm day in 1987, Mrs. Sayre and a group of friends visited the Fleet Air Arm Station's Museum, located in Somerset, England.  This particular museum showcases artifacts from the flying arm of the Royal Navy.  Four exhibit halls are home to over 90 aircraft, 2 million records, and 30,000 additional artifacts.

During her visit, Mrs. Sayre was allowed to pose inside a helicopter and have her picture taken.  This particular helicopter was used in the 1982 Falklands War, a small conflict between the British and Argentine over the Falkland Islands.  It is undetermined as to whether the original pilot of the aircraft pictured was killed in duty or not.  Also, as I'm not up to date on my helicopter histories, I couldn't tell you what type of helicopter it is, but can say that the Westland Wasp was a popular helicopter used by the British during this conflict.

In any event, the photo above shows what many clearly see as a gentleman wearing a white shirt, seated beside Mrs. Sayre.  It doesn't appear that he is wearing a uniform of any type, especially not those worn by the British Royal Navy during this time period, with maybe the exception of the anti-flash gear.

According to internet sources, the Society for Psychical Research did interview Mrs. Sayre.  She claimed that no one was in the cockpit with her when the photo was taken.  She also claimed that although it was a warm day, she remembered being unusually cold while sitting in the helicopter.
Posted by TheresaHPIR at 3:26:00 PM