As a paranormal investigator, I like to think of myself as being scientifically-minded. I strive to maintain a logical, objective stance on all things paranormal.  But, I'm also a West Virginia mountain girl! My family, who settled in the Irish Mountain area of Hinton, WV, came from a long-line of Scot-Irish, German, and Cherokee heritage. Ghost stories and superstitions made up a huge part of their lives and a huge part of their belief system. As the years go by, I'm trying to document as many of the old ghost stories and spooky superstitions that have been passed down to me since I was a small child. Here are a few of my favorite superstitions related to spooks and spirits. 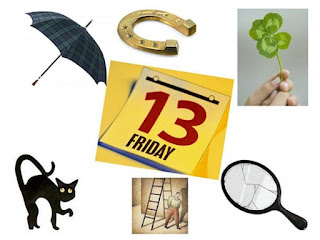 *A person born with a caul over his face will have the gift of second sight, and be able to see and converse with spirits and ghosts.  My maternal grandfather was born with such a caul.

*The seventh son of a seventh son will also have increased psychic abilities and be able to converse with spirits.

*A person who never meets their twin will have psychic abilities.  My father, while not claiming to be psychic in any sense, had a twin sister who died as a baby.

*When a candle starts to flicker and there is no breeze or draft present, a spirit is near.  If the flame should turn blue or abruptly flare up, the spirit is strong...and very near.  If a candle lit during a religious ceremony unexpectedly blows out, an evil spirit is near.

*Never rock an empty rocking chair; you're inviting ghosts in.

*If you WOULD happen to encounter a ghost or spirit, ask the spirit "In the name of the Lord, what is it that you want?"  They have to tell you why they are there.

*Since animals can see ghosts and spirits, removing the inner eyelid from a dog and wearing it like a contact lens will give the wearer this ability as well.  For a more humane (and less disgusting) method, simply crouch down behind a dog, and look between its ears to see what it sees.

*If you hear your name being called and no living person is around, DO NOT answer!  It's a spirit with bad intentions.

*However, if you hear your name being called while you're asleep, it means you slipped too far into unconsciousness and too close to death.  The angels were calling you back.

*When someone dies, all mirrors and reflective surfaces must be covered with black cloth so that the person's spirit does not become trapped in those items.

*The funeral procession must take a different route home from the one they took to the cemetery so that the ghost of the deceased cannot follow them.

*A bird in the house is an omen of an upcoming death. And speaking of death omens, West Virginia has a very strange story of a death omen foretelling the assassination of President McKinley.

So that's a VERY short list of superstitions that can be found throughout West Virginia and Appalachia! If you know of any others that deserve to be on this list, hop on over to Theresa's Haunted History Facebook and let me know!