On January 22, HPIR will be conducting its second investigation of the famous Z.D. Ramsdell House, in Ceredo, WV.  Please read on to hear the history of this fascinating home, long believed to be haunted by the spirits of soldiers and slaves alike!

UPDATE:  The investigation has been completed, and evidence has been obtained.  Give us YOUR thoughts on this interesting EVP that was captured in what was once used as the home's labor and delivery room!  HPIR Ramsdell 2011 Investigation 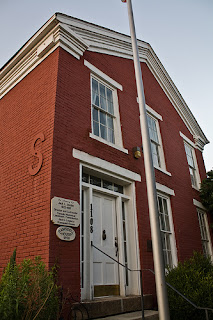 The town of Ceredo was founded in 1857 by Eli Thayer, a strong abolitionist who was determined to prove that a town could be prosperous without the use of slave labor.  The following year, he personally invited another abolitionist from Abingdon, Massachusetts (near Boston), Zopher Deane Ramsdell, to join him.

Z.D. Ramsdell was a businessman who soon settled in the area and opened a boot and shoe factory.  In 1858, Ramsdell completed his home at 1108 B Street, Ceredo, a lot he purchased from the Thomas Jordan family.  This brick building was the first of its kind in Ceredo, and was built by Mr. Denney Shine, a mason with the Chase Brothers Contractors. The home was built atop a mound, rumored to be an Adena Indian burial mound, and also contained a "hidden" basement.

According to local legend, this hidden basement was used as part of the Underground Railroad.  Slaves would be sheltered there before being ferried out during the night across the Ohio River into Lawrence County, Ohio.  (In fact, during our first investigation, we did find several access panels in the floors to a crawl space, plenty big enough for several people to take shelter in.)

During the outbreak of the Civil War, Ramsdell enlisted with the Union Army as a member of the Quarter Master Corp in the Fifth Regiment Virginia Volunteer Infantry, seeing action in the Burning of Guyandotte.  He was later promoted to Captain.  After the war, he returned to Ceredo, where he was appointed as a special agent of the post office, elected to the WV State Senate (1869-1870) and sat on the board of commissioners for the Ceredo Independent School District.  He was also instrumental in writing legislation establishing the area's first "free schools" for ex-slaves.

Ramsdell lived in the home until his death from consumption (now known as tuberculosis) in 1886, and the home remained in the family until 1977.  By 1982, the city had appointed a Historical Landmark Commission and together with the American Legion, restored the building.  Visitors to today's museum may notice a big steel "S" on the side of the house, supporting a bar that stabilizes the structure.

Due to its involvement with the Underground Railroad and its location atop an Adena Mound, many ghost stories arise from the Ramsdell Home, and men seem to be most susceptible to the activity. Poltergeist activity such as doors opening and closing and lights switching on and off on their own accord are commonplace.  In addition, it is rumored that you can hear the moans of slaves and chains rattling in the "hidden" basement.  Through our multiple investigations of this location, we feel pretty strongly that any sign of chains rattling is probably most likely blamed on the massive train yard that sits behind the property.  Apparitions of slaves have also been seen, as it is rumored that there are several who are buried on the property.  Several Civil War veteran's graves were also said to have been located on the property.

As more and more investigations are conducted on a more regular basis, it is now believed that the spirits of the Ramsdell family, and possibly several men and women who worked for them, are just as, if not more, prevalent in the home than the original activity reported online during the web's infancy.

Please email me for more info on the Ramsdell family genealogy, the slaves on the Lawrence Co. side known to assist those fleeing Virginia, and additional info on the house itself!  I've compiled quite a bit of historical information, which I have shortened here for the sake of brevity.  Please also see HPIR's website for information on our first investigation of the home, which took place in 2009!

*Note:  We've investigated this location for a third time in 2012.  Unfortunately, no evidence of note was captured, but we had a wonderful time!*
Posted by TheresaHPIR at 8:38:00 AM