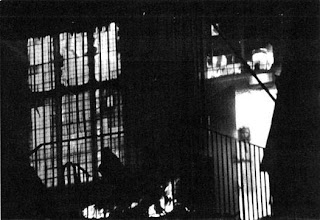 The town of Wem, located in Shropshire, England, is a small market town with roots going back to the 1200s.

On November 19, 1995, the town hall caught fire.  This wasn't the first major fire in the town's history, however.  In 1677, a fire started on nearly the exact same location as where the town hall now stands, destroying much of the town's old timber houses.

Over 60 firefighters battled the blaze, and were able to save much of the historic exterior including a plaque commemorating the 1677 fire, but unfortunately, the inside of the building was completely gutted.  Townspeople gathered around to watch the blaze, but soon the intense heat and out of control flames caused the crowds to be pushed back.

The photo in question was taken by Tony O'Rahilly from across the street.  The photo was taken with a telescopic lens, using 200mm black and white film.  When the film was developed, the image of a young girl wearing what appears to be a bonnet showed up in the doorway to the building.  Knowing that no one could survive the intensity of the flames, and that everyone was reported to be out of the building at the time, O'Rahilly submitted the photo to the Association for the Scientific Study of Anomalous Phenomena, who in turn, sent it to be analyzed by photo expert and former president of the Royal Photographic Society, Dr. Vernon Harrison.

After examining the negative and the photo itself, Dr. Harrison concluded that there was no tampering involved.  However, he felt that the image of the little girl is simply the result of simulcra; O'Rahilly had managed to snap a photo at just the right time to cause an optical illusion from the smoke and flames.

Still, many people believe that the photo is genuine, and that the building has a history of being haunted.  The 1677 fire was believed to have been started by a 14 year old girl named Jane Churm, who accidentally either dropped a lit candle, or caught a thatched ceiling aflame with a candle.  The 1677 fire burned so intensely, that the church bells partially melted, resulting in them having to be re-cast.

In the 1995 fire, fire investigators ruled out arson, but could not come up with an explanation for the blaze.  Some believe that the fire was started by none other than Jane Churm.  Others feel that Jane Churm showed up to protect the building, or express remorse for her part in the original fire.

The town hall WAS rebuilt, at a cost of nearly $3.6 million U.S.  However, budget cuts ten years later caused an uproar over the fate of the historic building.  The town hall was closed in favor of public opinion that the town pool should receive the funding instead.

Fate of the Town Hall

UPDATE May 2010:
This photo has been proven to be a hoax!  The girl's image appears to be identical to the image found on an old postcard, printed by a local paper.  Please see the SUN's website for full story and photo! 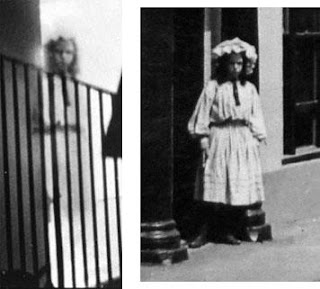