*There has been such an influx of trespassers to this property during the spring of 2014 that security cameras have been installed and people ARE being arrested.  Please, please, please do not trespass! Trespassing is illegal and inherently dangerous and trespassing in the name of "ghost hunting" reflects poorly on the paranormal research community as a whole and makes it that much harder for legitimate groups who follow the rules to be allowed access to (and to even TALK about) some wonderfully historic locations.  Once again, Theresa's Haunted History DOES NOT condone trespassing in any form.  Please don't let your quest for a cheap thrill ruin it for the rest of us.*


In 1928, Walter T. Morris, an unmarried farmer in the Milton area, had a life-changing experience.  His beloved niece was diagnosed with infantile paralysis...otherwise known as polio.  For many months, the family was emotionally exhausted.  However, proper care allowed Morris' niece a chance at a normal life. 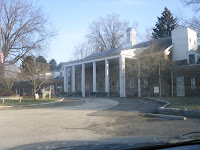 So impressed with her medical care, and recognizing a need for such in the Cabell County area, Morris deeded his 200 acre farm in 1930 for use as a facility for crippled children.  At first, the Morris home was used to treat a handful of patients, until construction on the sandstone structure of today was begun in 1936.
Hundreds of children received care at this state of the art facility, complete with auditorium, full service kitchen, and even a school staffed by the Cabell County Board of Education.  However, when Salk discovered the polio vaccine in 1955, the hospital was no longer needed.  In 1958, John and Rose Green took ownership and opened up a nursing and convalescence home on site.

Today, the building is largely abandoned, and its fate sits in limbo.  Possibly, the fate is not ALL that sits in limbo at this massive structure.  The hospital is widely known to be haunted...a reputation it seemingly acquired during its time as a nursing home.  Former staff members report eerie feelings and paranormal activity in the basement, the chapel, and the south wing in particular.  Shadows have been seen out of the corner of one's eye, and apparitions of patients (or former patients) vanish in hallways.

UPDATE: April 2012  We've recently heard that the local police are really cracking down on alleged trespassers, including those who visit the property during daylight hours.  Several months ago, I noticed that No Trespassing signs are now posted at the entrance to the property.  Theresa's Haunted History and its affiliates do not condone trespassing; please respect all posted laws and obtain permission before visiting this location.