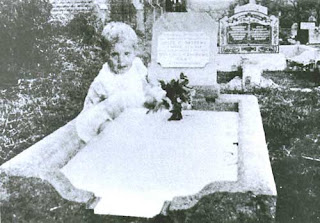 The ghost baby upon the grave is another one of those photos that is repeatedly posted around the net as being one of the top examples of ghost photography out there...and its meager description is posted nearly word for word on each one of these sites.

However, a little digging has paid off, and a few details have been added for your reading pleasure!

On April 26, 1945, 17 year old Joyce Elizabeth Andrews passed away.  Joyce, born on August 4, 1928, was interred in Queensland, Australia's Ma Ma Creek Anglican Cemetery.  She was interred along with her brother, Sgt. Cecil H. Andrews of the RAAF, who had died in 1942.  Joyce's parents were John William Andrews and Mary Elizabeth Colquhoun.

Sometime between 1946 and 1947, Joyce's mother visited the cemetery and snapped a photo of her children's shared tombstone and plot.  Mrs. Mary Andrews, upon having the film developed, notice an intriguing anomaly on the photograph---there was an infant girl sitting happily on the grave, staring right towards the camera!

Several theories have cropped up as to what may have caused the ghostly little girl.  One theory involves the idea that the apparition is a manifestation of Joyce herself as a baby.  Mrs. Andrews denied this theory, believing that it is NOT an image of her daughter.  She also denied the most plausible explanation of the image being caused by double exposure.  Mrs. Andrews claimed that she did not recognize this child at all, and therefore, would have been no one she would have taken a photo of.  Further, there were no children or babies present at the cemetery that could have mistakenly gotten into THIS shot or any others on the roll of film.  At least...there were no LIVING children present.

Intrigued by the decades old mystery, it is said that Australian paranormal expert, Tony Healy, most known for his work in cryptozoology, visited the site in the 1990s.  Healy claimed to have found the graves of two infant females near the Andrews grave, and thus, it is largely believed that the apparition is the soul of one of these babies, playing happily on a nearby grave.  As I am not familiar with the layout of the cemetery, I have no idea which two graves Mr. Healy is referring to.  However, THIS WEBSITE about the cemetery has full inscriptions, and can be searched by either first-name alphabetical, or "position" in cemetery.  I found a handful of infant and toddler girls (and boys) buried in the cemetery, and there is a stone dedicated to two different babies of the Litfin Family who died in 1953 and 1954.  There is no name or gender listed on this stone, as it appears the infants were stillborn.  From the website, it does appear that this tombstone is located very close to Joyce's...but would not have been there when the photograph was taken.

Further, the tombstone in the background appears to belong to Arthur Robson, who died in 1937 and his wife, Mary Jane, who died in 1948.  I cannot tell from the original photo if the date of death is filled out for Mary Jane, but if it IS, then that could possibly indicate that the photo was taken later than originally believed--post 1948.  In my opinion, it does appear that the date of Mary Jane's death is already inscribed onto the stone.  A photo of the Robson stone can be found on the website mentioned above for your own analysis.  There are slightly similar stones in the cemetery, so take it with a grain of salt.

Personally...I'm going to go with the double exposure theory.  For starters...am I the only one seeing what appears to be an ARM coming out from under the child?  It appears that the image is a partial image of a person in white sleeves holding the child.

Further, I think its very plausible that a photo of someone holding a child could have gotten on this roll of film.  Since there is speculation as to when the photo was taken (either 1946 or 1947 or even later) I think that a likely scenario was that the photo was taken, and the film forgotten and not developed until some time later.  During that time, anyone could have gotten ahold of the camera. 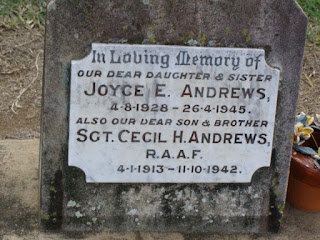 Actually, until researching this photo, I would have confidently said that I believed the story was completely fictional...something that was made up to explain a weird photo then passed along over and over with the popularity of the internet.  However, I did manage to FIND an updated photo of the tombstone in question, plus vital statistics on Joyce and her brother.  So...even though there's still a chance that the story is fictional, made up to go along with an old double exposure photo found in someone's attic, the people are real-the places are real!
Posted by TheresaHPIR at 11:21:00 AM