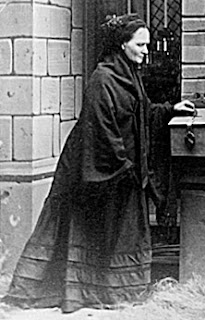 As a tour guide with Haunted and Historic Guyandotte Tours, I am expected to dress in period attire.  My favorite character to portray during these tours has become our local mascot, The Lady in Black.  Here is her story.

Perhaps the earliest published local account of the supernatural is contained in the Huntington Advertiser for September 23, 1905 in an article titled "Guyandotte Inhabited by Ghost." At the time, Guyandotte, then nearly a century old, was a sleepy little river town located two to three miles east of Huntington.

The article reports that for the past few nights, Guyandotte residents "have been considerably worked up over the persistent and mysterious appearance of a ghost dressed in the black habit of a woman in mourning."

The story states that the ghost "frequents North Bridge and Short Streets where the shade is the thickest and the gloom and stillness give to the surroundings the appearance of a most desirable stop...selected by goblins and spirits to prowl."

The ghost is described as having "the appearance of a woman dressed in the deepest shade of black," and when pedestrians are passing along the above named streets, she walks up behind and keeps pace with them whether they walk fast or slow or, if they stop, she also will stop. It adds that the spirit continues this pace until the pedestrians reach better-lighted streets when she disappears. Most Guyandotte women avoided the area after several had encountered "the mysterious personage."

Several nights before, as a man was on his way home and was walking along one of the haunted streets, "the lady in black approached him from behind," says the story. It adds that the man thought it was someone wishing for him to stop, so he waited for her, but when she got close to him she also stopped. He tried to speak to her but she did not utter a word and kept her distance from him. He then resumed walking with the ghost following behind him. He walked faster and she followed. Then he stopped and so did she. At about this time, he began to get cold chills up his back and he tried to think of a way to escape from theapparition but it was useless. Finally he started to run for home and looking back, he found the woman pursuer close behind him. When he arrived within a block of his home, "the report goes that the neighbors were awakened by the loud yells in a masculine voice calling to his wife to open the door for him."

Whether the ghost of "the lady in black" ever reappeared to stalk desolate Guyandotte streets is not known.