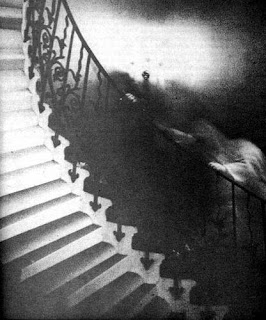 On June 19th, 1966 retired Rev. Ralph Hardy and his wife were on vacation in Greenwich, England.  They were touring the Queen's House section of the National Maritime Museum and Mrs. Hardy, spotting the famous Tulip Staircase, wanted a recreation photo of it that she had recently seen in a magazine.  As the actual staircase and landing above (where the photo was taken) were cordoned off by museum staff, Rev. Hardy took a photo from UNDER the staircase with his camera, a Zeiss Icon Contina-Prontor S V S Zavar Anastigmat lens, 1:3.5f=45mm, with skylight auxilary haze filter.  He used Kodak Kodachrome X 35mm color film, speed 64.  No flash was used.

When the Hardy's arrived home to White Rock, British Columbia, and had their vacation photos developed, they were surprised to see what appeared to be a figure on the staircase, with its hands on the railing, and head down as if in mourning.  Some believe there may also be a second figure resting against the railing as well.

The following year, the Hardy's returned to England, where they were extensively interviewed by Mr. McQueen.  Details pertaining the camera and film used, as well as positioning and weather (it was fair but cloudy around 5pm when the photo was taken) were discussed and verified.  The details of this interview can be found in The Ghost Hunter's Guide by Peter Underwood (1986).

On June 24, 1967 the Ghost Club conducted its own seance and investigation of the building under strict supervision of the museum.  They did manage to capture on audio what sounded like footsteps on the Tulip Staircase, but nothing of real note.

However, over the years, the building has had its fair share of ghostly reports, many of which do seem to focus on the Tulip Staircase.  Figures have been spotting on the staircase, as well as visitors and staff hearing the sounds of footsteps on the stairs.  Perhaps the most intriguing sighting could account for the phantom photo...a pale woman is seen mopping up a puddle of blood at the bottom of the staircase.  It is said that around 300 years ago, a maid was thrown off the top of staircase, where she landed 50 feet below to her death.  Another lady's apparition has also been seen in the area, one wearing a gray crinoline dress.  The sounds of children chanting have been heard, and tourists have been pinched by unseen fingers.

This link has some awesome information on the history of the building, and some additional details on the photo and hauntings:  Mysterious Britain and Ireland
Posted by TheresaHPIR at 11:51:00 AM