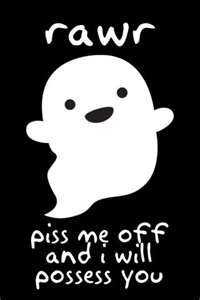 I'm jumping the gun and posting this a day early...just in case for some reason I'm too busy tomorrow!  The story below was "borrowed" from the website, Love to Know-Paranormal.  However, I'm still trying to find it, but I'm almost 100% sure that I first heard this tale not long ago, told from a first hand account of a witness, on the TAPS 18+ message board!  Enjoy!

A paranormal investigative group in Connecticut were called to a haunted house. The homeowners warned the group that the house was haunted by an especially "evil" spirit that enjoyed playing pranks. The team leader of the paranormal society invited along a friend from Massachusetts. He was a physicist, and amateur paranormal investigator, who everyone called "Doc". Doc believed that there were no such things as ghosts or poltergeists, and that every type of haunting or unusual phenomenon had a reasonable, earthly explanation.

They traveled across the State of Connecticut in three vehicles filled with team members and equipment.

Upon arriving at the home, the team immediately started setting up the monitoring equipment as the team leader and his friend, Doc, received a tour of the home from the homeowner.

At one point in the tour, as the three men approach the staircase that led to the second floor, very loud footsteps could be heard on the upstairs landing.

"Is anyone else home?" Doc asked the homeowner.

"No, my wife's at work and we have no kids," the homeowner replied.

Excited to have his first opportunity to confront an alleged ghostly spirit, Doc walked to the foot of the stairs.

"Come on! You can do better than that you lousy ghost!" Doc yelled up the stairwell.

"Doc, I wouldn't do that if I were you," the paranormal team leader advised. Doc ignored him. Instead, he stepped up onto the bottom step.

"If you're really a ghost, why don't you show us what you can really do, you lousy, no-good prankster!" Doc yelled.

The moment the last word came out of his mouth, his pants flew down around his ankles. The homeowner and the team leader burst into laughter as Doc, terrified, struggled to pull his pants back up. He then stumbled as fast as he could out the front door of the house. He refused to re-enter the house or to talk about the episode ever again. However, the episode went down in the records as one of the most humorous moments the paranormal team had ever witnessed in a haunted home. They still tell this funny ghost story to every new team member.