The Legend of Octavia Hatcher 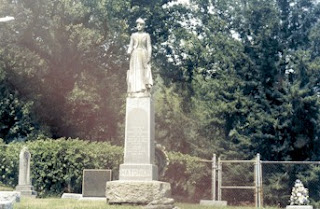 Along with the more famous Hatfields and McCoys, another prominent family from the Pikeville, Kentucky area was the Hatcher Family.  In 1889, James Hatcher, a local businessman, married a girl named Octavia Smith, daughter of Jacob Smith, and heir to another well-established early family of the area.

Octavia gave birth to the couple's first and only child, a son named Jacob, in January of 1891.  Unfortunately, the child died shortly after birth, sending Octavia into a grievous post-partum depression.  Taking to her bed, the family and townspeople thought she was simply in a state of mourning over the loss of her child, and perhaps, that was the start of it.  However, her health grew progressively worse, and by April of that year, she had slipped into a near-comatose state.

Octavia died on May 2, 1891.  Her cause of death was listed as an unknown illness, but many people believed that she had mourned herself to death.  Her body, un-embalmed, was quickly buried in the Pikeville Cemetery on Johnson Cemetery Road.

Not long after Octavia's death, several other townspeople began coming down with a similar illness of slipping into a comatose state.  It is unclear as to the direct cause, but the new rash of cases called for the immediate exhumation of Octavia's body from the cemetery.

What was found was the birth of many urban legends to come.  Octavia had obviously been buried alive.  The coffin, which was not airtight, had afforded Octavia up to several days before she had asphyxiated.  The top of the coffin was torn to shreds by Octavia's bloodied fingernails, and it is said her face worn a countenance of sheer horror...a result of awakening from her sleeping sickness and finding herself entombed in her own grave.

Her body was re-buried in the same family plot, and her husband erected a tall monument in the likeness of his wife over the grave.  The figure at one time also held the statue of a small baby, her son Jacob, but vandals have taken their toll on the monument.

Perhaps the close proximity to the local college is what really fueled the urban legends of this tragic tale.  Many believe that Octavia was actually pregnant at the time of her passing, and when the body was exhumed, the infant boy was found, alive, born to a dead woman, before dying a few days later.  There are many other variations of the Octavia story, but local credible witnesses do agree that the area has always been home to a rash of spooky goings-on.  Witnesses report hearing a crying sound at night, a sound that sounds almost like a kitten, coming from or around Octavia's grave.  Others have experienced a misty apparition seen standing by the grave, no matter what time of day or present weather conditions.

In the 1990s, an attempt to foil vandals was created by erecting a fence around the plot, and adding an additional marker telling the tragic, yet factual tale, of what REALLY happened to Octavia Hatcher.  As a side note, it is said that Octavia's husband, James, had a special coffin made for himself that would prevent him from experiencing the fate of his wife.  He passed away in 1939, allegedly with no incident.

The photo above was taken by Herma Shelton, whose research also uncovered the liklihood of Octavia's mysterious illness being caused by a bite from a certain fly.

More info from Troy Taylor
Posted by TheresaHPIR at 9:39:00 AM