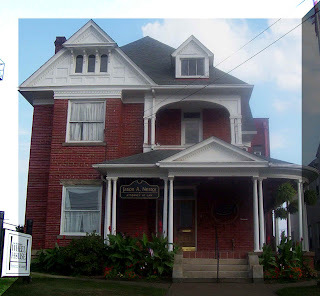 Now a popular restaurant sitting on Avery Street, the Boreman Wheel House was built for the daughter of WV's first governor, Arthur I. Boreman.  Boreman himself owned a home directly across from the Boreman Wheel House, but it was torn down in the 1970s, leaving in its place a parking lot.  Boreman, who was elected governor in 1863, died in 1896, survived by two daughters, Maud and Lorraine.

Situated to the side of the Wheel House is another building, this one having been used as a hospital during the Civil War.  It is believed that the soldiers who died at this hospital have somehow managed to find their way next door to the Wheel House, possibly tempted by another type of "spirit."  During their stay at the hospital, many soldiers became addicted to alcohol as a pain reliever...and may still be seeking that relief to this day.

Witnesses at the Wheel House claim that expensive wine glasses will roll out of their shelving and shatter to the floor.  Bottles of wine have even gone missing from upstairs, only to be found in the basement area.  Other reports of activity include hearing phantom voices and whispers, and phantom footsteps on the wooden floors.  Orbs are often photographed in the attic area, but the most substantial report comes from the basement once again.  Two ghost hunters conducting an investigation at the location witnessed the full bodied apparition of a light haired man standing behind the bar area.  The man spoke aloud a cheery "Hello!" before dissipating before their eyes.

This site is included on the Haunted Parkersburg Ghost Tours, which I HIGHLY recommend!
Posted by TheresaHPIR at 6:43:00 AM