The Ghosts of Berkeley Castle 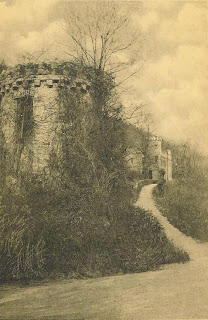 In the northern panhandle of West Virginia, one can find a most curious oddity:  a replica 1/2 scale Norman castle.  The castle was built in 1885 by Colonel Samuel Taylor Suit and modeled after the REAL Berkeley Castle in Bath, England, which was home to Virginia's 3rd colonial governor, William Berkeley.

Suit had been from a wealthy business family, and had fought for the Confederacy during the Civil War.  At the age of 46, he met and fell in love with the 17 year old Rosa Pelham, daughter of Congressman Charles Pelham.  Rosa agreed to marry Suit only if he'd build her a castle.

Construction on Berkeley Castle began and the two were wed shortly thereafter.  A total of three children were the result of the marriage, including two sons and a daughter.  The daughter died of illness in her teen years.  Unfortunately, Colonel Suit passed away before the construction of the castle was complete, and stipulated in his will that Rosa could not inherit his fortune unless she completed the construction.  Of course...she did.  The castle cost an estimated $100,000 at the time to complete.

The castle became a hub of social activity, with Rosa hosting parties that lasted from sun-up to sun-down on a regular basis.  These lavish parties eventually led to financial ruin by the time Rosa was in her 50s.  She took a mortgage out on the castle, but still lost ownership after failure to pay a mere $4,000.

It was purchased in 1954 by Walter Bird, who restored it, and filled it with antiques, as most of the original furnishings had been sold off.  Today, it is open to the public and again hosts many parties, including weddings and wedding receptions.  It is also host to a wide array of paranormal activity.  Phantom footsteps and the laughter of children are routinely heard, as are loud crashes that seem to come from upstairs.  When staff checks, they find nothing disturbed.  Furniture is also moved around fairly regularly by unseen hands.

The most haunted room in the castle is said to be the second floor combination office/drawing room.  In this room in 1993, several witnesses claimed to have seen a quill pen raise itself up, and twirl around.  The witnesses then fled in terror.  Another rather odd incident involves mysterious power failures.  These power failures only seem to happen in the middle of wedding CEREMONIES, not the receptions or other events.  Is someone or something trying to warn the couple?  Perhaps there's a reason why....

A rumor surrounding the castle tells that the Colonel actually died of mysterious circumstances.  It is believed that right after he changed his will to leave everything to Rosa, Rosa managed to poison him.  Two of Rosa's lovers also suffered mysterious deaths.  The first died as a result of falling onto the tip of Rosa's parasol as the two struggled on a staircase.  A later lover mysteriously fell off the roof.

Do Rosa's former lovers and husband still walk the halls of this lavish estate, trying to make their stories heard....or does Rosa herself feel doomed to walk for enternity the halls she so desperately desired in life?

Berkeley Castle Homepage, with more info on the history and the hauntings
Posted by TheresaHPIR at 8:49:00 AM