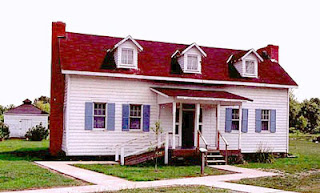 Long before George Summers made a name for himself in Virginia politics and purchased the palatial Glenwood Estate in Charleston, he and his family lived a much simpler life at the family farm of Walnut Grove.  Walnut Grove was located near present-day Winfield, WV, Putnam County.  The family home, a log structure, was built around 1812.  The home stood on the property and stayed within family possession until 1980.  The last Summers relative to have lived in the home was Fred Summers, who left the property to his niece, Lucy Quarrier.

The John Amos Power Plant, being nearby, had purchased the farm property and a decision had to be made as to what to do with the home.  Originally, the idea was for it to be moved to Charleston, where an entire city block was set aside for it.  It was intended to be listed on the National Register of Historic Places, but unfortunately, that plan fell through.  In order to save the house from destruction, Lucy Quarrier donated the home and it was moved on location to Pt. Pleasant's WV Farm Museum.

The house still sits at this location, where tours can be taken during regular museum hours.  As for the family cemetery that was on the Walnut Grove plantation...that was moved to Charleston's Spring Hill in 1978.  The family cemetery contained not only the Summers patriarch, Colonel George, Sr., but also George Summers, his brother Lewis, and other family.  Interestingly, a favorite family slave, an alleged African prince named Scipio, was buried with the family.  When the cemetery was relocated, Scipio retained his place of honor, along side his master, Colonel George Summers, Sr.

This house first came to my attention when another local paranormal investigator was trying to set up an investigation.  Apparently staff and contractors working on the house claimed to have a variety of paranormal experiences, which they attributed to the house itself, mainly the sounds of knocking and other indistinquishable sounds.

Please check back for more information on this site later on!  I've actually done quite the bit of historical research on this family and the house, but have yet to uncover any substantial information about hauntings...so if you have any info, please pass it my way!  I'll also develop this history a little more in-depth in the next few months after I get to tour George's Charleston home of Glenwood in early October.